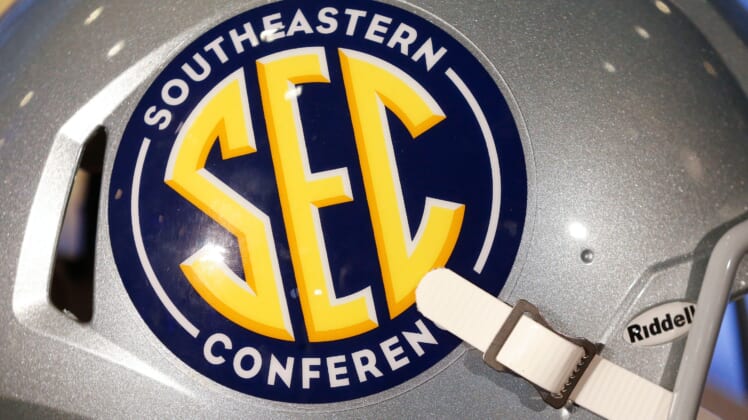 The SEC is already a super conference with the likes of the Alabama Crimson Tide, LSU Tigers, Georgia Bulldogs and Florida Gators pretty much always relevant on the broader national college football stage.

Now, the conference could potentially add two more national powerhouses in that of the Oklahoma Sooners and Texas Longhorns.

According to Brent Zwerneman of the Houston Chronicle, the two Big 12 schools have expressed an interest in joining the SEC. In fact, an announcement could come at some point in the near future. This is not a drill. It could actually happen.

“Texas and Oklahoma of the Big 12 have both reached out to the Southeastern Conference about potentially joining the powerful league, a high-ranking college official with knowledge of the situation told the Houston Chronicle on Wednesday,” Zwerneman reported. “An announcement could come within a couple of weeks concerning the potential addition of UT and OU to the league, the person said, which would give the SEC 16 schools and make it the first of a national super-conference.”

This has to qualify as absolutely stunning news around the college football world and would change the dynamics around the nation in the big way.

Imagine the annual “Red River Shootout” between Oklahoma and Texas taking part within the confines of the SEC. It would be an absolute boon for the best conference in college football.

A move of this ilk for Oklahoma and Texas would also create a trickle-down effect when it comes to the Big 12. Remember, it was back in 2012 that both Texas A&M and Missouri left that conference for the SEC.

From a practical standpoint, this could also place into question the dominance we’ve seen from Oklahoma under Lincoln Riley in recent years. Playing an SEC schedule is much different than taking part in Big 12 action. That’s the objective truth.