The Seattle Seahawks expect running back Chris Carson, who has missed the past four games with a neck injury, back at practice Wednesday.

The team is expected to designate him for return from injured reserve. At that point, the Seahawks will have 21 days to activate him to the 53-man roster.

“What I was told today is that Wednesday he’ll be on the field,” Seahawks coach Pete Carroll said. “We’ll see how that goes.”

Carson hasn’t played since Week 4, a Seattle win over the San Francisco 49ers. He had rushed for 232 yards and three touchdowns before getting hurt. 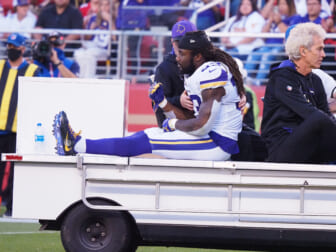 Alex Collins has started the past four games at running back, rushing for 227 yards and a touchdown during that span.

The Seahawks (3-5) will get back quarterback Russell Wilson this week after he was cleared to return Monday. He’s expected to start Sunday against the host Green Bay Packers (7-2). Also Monday, the team designated wide receiver Dee Eskridge and linebacker Nigel Warrior for return.

Eskridge has been out since Week 1 after suffering a concussion. His availability for this week’s game against the Packers is not known just yet.

“I can’t tell you that right now,” Carroll said of Eskridge. “He looked good running around today, that’s all I know. Let’s see where he is tomorrow and the next day.”