While the Seattle Seahawks might seem like the perfect landing spot for a Baker Mayfield trade, head coach Pete Carroll is making it pretty clear trading for any quarterback likely isn’t an option.

Seattle surprised many in the 2022 NFL Draft by not spending a pick on a quarterback. For a rebuilding franchise that traded away Russell Wilson, not picking a signal-caller seemed like an obvious tell. In the eyes of many, it meant the Seahawks would trade for a passer.

There are two options available this offseason. The Cleveland Browns desperately want to trade Mayfield and the San Francisco 49ers are pushing to find a trade partner for quarterback Jimmy Garoppolo. 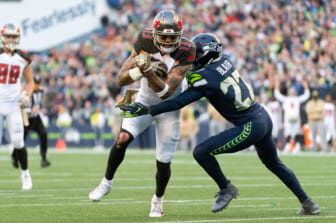 However, Carroll made it clear to reporters this week that trading for another passer to challenge Geno Smith and Drew Lock for the starting job probably isn’t happening.

“I don’t see us making a trade for anybody at all. I don’t see that happening.”

Seattle Seahawks coach Pete Carroll on possibility of trading for a quarterback, via Brady Henderson

As it stands, Seattle’s depth chart currently includes four quarterbacks. Smith is the most experienced player and Lock offers some potential. Behind them, Jacob Eason and undrafted free-agent signee Levi Lewis will likely compete for a spot as the No. 3 quarterback on the practice squad.

Who will be the Seattle Seahawks starting quarterback in 2022?

The Seahawks liked what they saw from Smith in limited opportunities this past season. When Wilson went down, Seattle’s veteran backup and the former 39th pick in the 2013 NFL Draft stepped in as the starter for a few weeks.

Across three starts, Smith completed 70.5% of his 78 pass attempts and threw four touchdowns with a 108.4 quarterback rating. Considering he was playing behind a weak offensive line, the Seahawks had reason to like his overall performance.

Given Smith’s familiarity with the offense and chemistry with his teammates, he should be favored to start in 2022 and will likely take the field in Week 1. However, the Seahawks’ front office believes there is some talent inside Lock that could lead to some productive moments and he’ll likely make multiple starts in 2022.

It’s certainly one of the worst quarterback situations in the NFL, but the Seahawks are fine with it in the first year of a rebuild.