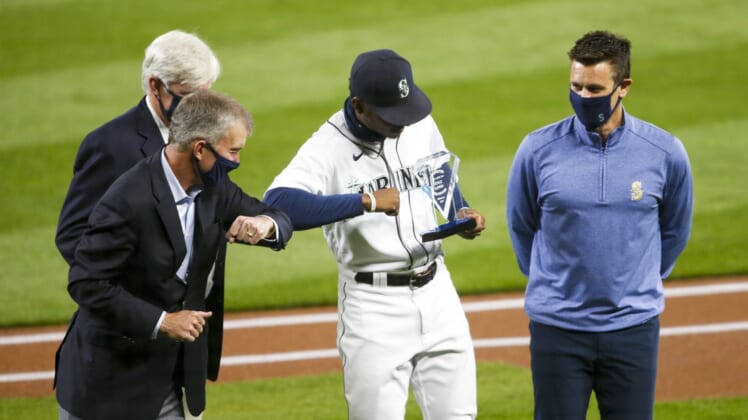 Seattle Mariners president Kevin Mather issued an apology for eye-raising remarks he recently made, including assessments of how poorly two current and former players spoke English.

Mather apologized Sunday night after a video was posted of remarks he made to a local Rotary Club on Feb. 5. In those remarks, he said Mariners prospect Julio Rodriguez “is loud, his English it not tremendous.” He also said former pitcher Hisashi Iwakuma’s English “was terrible.”

“I want to apologize to every member of the Seattle Mariners organization, especially our players and to our fans,” Mather said in a statement. “There is no excuse for my behavior, and I take full responsibility for my terrible lapse in judgment.

“I’ve been on the phone most of the day today apologizing to the many people I have insulted, hurt, or disappointed in speaking at a recent online event,” he added. “I am committed to make amends for the things I said that were personally hurtful and I will do whatever it takes to repair the damage I have caused to the Seattle Mariners organization.”

Iwakuma appeared in 150 games in six seasons with the Mariners, and the club hired him in January as a special assignment coach. Mather was fielding a question about what the club does to help foreign players with learning to speak English.

“We just re-hired Iwakuma. … Wonderful human being, his English was terrible,” Mather said. “He’s coming to spring training. And I’m going to say, I’m tired of paying his interpreter. When he was a player, we’d pay Iwakuma X, but we’d also have to pay $75,000 a year to have an interpreter with him. His English suddenly got better, his English got better when we told him that!”

“Twenty years ago, if we signed a 16-year-old in the Dominican, we’d send them to a dumpy old academy with no hot water and a lousy rock-filled field,” Mather said in the online meeting. “Then when he was 18 or 19, we’d send him to Peoria, Arizona, put him up at the Hampton Inn, and give him $30 a day. He doesn’t even know how to make change! $30 a day for per diem, and surprise surprise, they’d get in trouble because they wouldn’t know how to speak the language or make change or even buy dinner.”

Mather was also overt in talking about manipulating service time for key prospects Jarred Kelenic and Logan Gilbert — among others. Mather said neither would start the season on the big-league club after a shortened 2020 season in which there was no chance of them getting called up.

“The risk was, if our major league team had had a COVID outbreak, or injuries, and we had to call people up from the taxi squad, we were a little short on players. Because there was no chance you were going to see these young players at T-Mobile Park,” Mather said. “We weren’t going to put them on the 40-man roster, we weren’t going to start the service time clock. There were all kinds of reasons that, if we had an injury problem or COVID outbreak, you might’ve seen my big tummy out there in left field. You would not have seen our prospects playing in T-Mobile Park.”

Mather was promoted to president and CEO on Dec. 14, 2017. He joined the Mariners in July 1996 as vice president of finance and administration.

The Mariners haven’t qualified for the postseason since 2001.