Sean Payton refuses to discuss whether Drew Brees will return 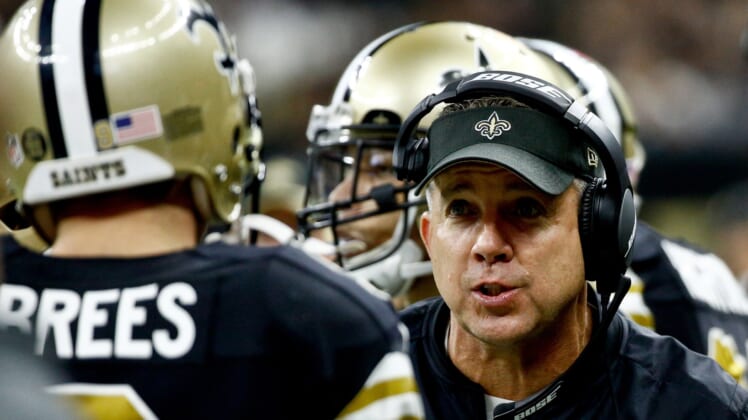 If it were up to Drew Brees, the New Orleans Saints wouldn’t hesitate to bring him back for the 2018 season, and beyond. He said he wants to keep playing for the Saints until they basically kick him out. Whether the same sentiment holds true for head coach Sean Payton, however, remains to be seen.

Speaking to reporters on Tuesday, Payton flat-out refused to discuss whether he wants Brees back next year.

“Not right now,” Payton said when asked whether he would comment on the process relating to the future Hall of Famer’s return via a new contract, per Mike Florio of Pro Football Talk. “So no. Politely, no.”

When pressed again by another reporter for some kind of hint about where his head is at regarding Brees, Payton stonewalled again.

“Like I just finished saying. I’ll say it to you, ‘No.’ We’ll get to you when it’s time, and I’m sure that we’ll go through the process. But today’s not the time.”

Now, Payton isn’t giving us any reason to think he doesn’t want Brees back. But by saying what he said he’s also leaving the door wide open for any possibility.

The Saints really have nobody else on their roster at the quarterback position who can do what Brees can do — heck, neither do most teams. But even if Brees signs a team-friendly deal he’s still going to be pretty expensive. And when the 2018 season kicks off, he’ll be inching ever closer to 40 (just turned 39 this month).

Also, there’s always a slight chance the Saints are setting their sights on a free-agent quarterback like Kirk Cousins. So it’s going to be interesting to see what this team does with its longtime leader on offense when the two sides start chatting closer to free agency.