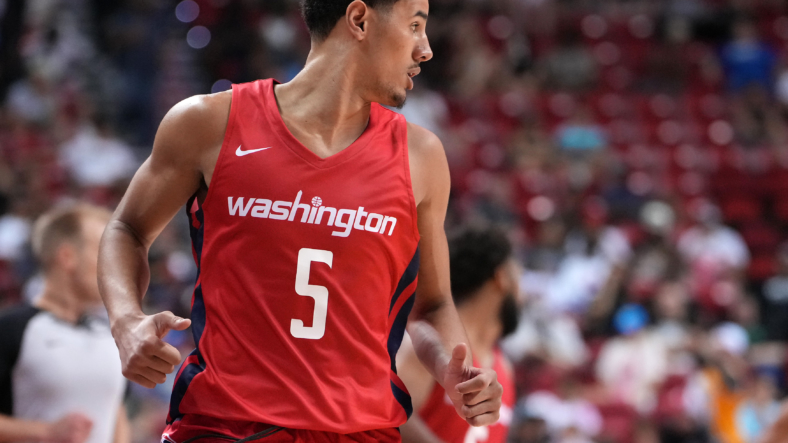 The Washington Wizards feel they got one of the most talented players in the 2022 NBA Draft when they selected Wisconsin guard Johnny Davis 10th overall. After averaging 19.7 points per game in his sophomore year, the 20-year-old Davis has proven to be an extremely effective scorer at the college level. Now he’ll look to continue his success in the pros with a Wizards team that includes Bradley Beal, a player who’s twice finished second in the NBA in scoring.

Davis can certainly learn from the three-time All-Star, but they play the same position, and their skill sets don’t exactly complement each other well.

In fact, several NBA scouts would go so far as to suggest Davis lacks several qualities and traits that he’ll need to thrive in the pros against the league’s top competition. The hints we saw in Summer League where Davis struggled? Those concerns about him looking a step or two behind may be valid, according to some.

Johnny Davis is too slow, not athletic enough to explode in the NBA

Davis had no trouble getting buckets once he got himself acclimated in college. Yet, he couldn’t get it done during Summer League play, scoring just 8.3 points per game. The level of athletes he faced on a nightly basis in Vegas were certainly more advanced than those he saw at Wisconsin, yet they’re still a step or two behind legit NBA talent.

One scout suggested Davis was also a slow starter in college, pointing to how he averaged just seven points per game as a freshman before nearly tripling his scoring output, boosting his points per game by 12.7 points in one season. That could be the case for Davis in the NBA too.

Yet, another scout doesn’t buy it. He believes Davis lacks the agility and foot speed to explosively drive past defenders, and his lack of a consistent outside shot doesn’t help offset his inability to get to the hoop.

For now, Davis doesn’t have a clearly defined role within the team. In 2022 he profiles as a bench scorer, but even in the future, his fit along Beal is strange. Despite general manager Tommy Sheppard believing both Beal and Davis could step in as an occasional point guard, that’s not their strong suit. They should be shooting, not distributing.

Another NBA scout would agree, saying he “doubts” Davis could ever be a point guard, describing Davis as a “two-guard that doesn’t shoot the 3 well”. While these potential flaws are obstacles Davis will have to overcome, he’ll have plenty of time to grow as the youngest player on Washington’s roster. With that said, Davis does have several traits that provide reasons for hope.

Two traits that stood out to scouts are Davis’ ability to rebound and of course, score. Rebounding generally translates to the pros, so that isn’t much of a concern. But will Davis’ knack for getting a bucket be the same in the NBA?

After shooting 32.5% from three-point range in his two seasons at Wisconsin, Johnny Davis will need to continue getting comfortable from an even further distance in the NBA to expand his game. No one expects Davis to suddenly become a Splash Brother, as his best work is done inside the perimeter, but to this point, his range remains a weakness.

A more realistic path to immediate success likely has Davis continuing to emulate his game after DeMar DeRozan, who’s one of basketball’s best scorers in the mid-range. Yet, if his ball handling, quickness, and ability to get open are still not on the NBA level, Davis could struggle to find clean looks near the hoop too.

Even though Davis drew criticism for his Summer League play, scouts believe he has a bright basketball mind and a strong will to improve. We saw him take major leaps forward from one year to the next at Wisconsin, and he’s still just 20 years old. The Wizards aren’t expecting him to suddenly become the face of the franchise, they have Beal for that.

They only hope to develop Davis into a valuable contributor down the line. If he becomes a star or even a superstar like he was in college, great. If not, well, that’s the reality of gambling in the NBA draft.