Washington Wizards have expressed interest in a Kevin Durant trade 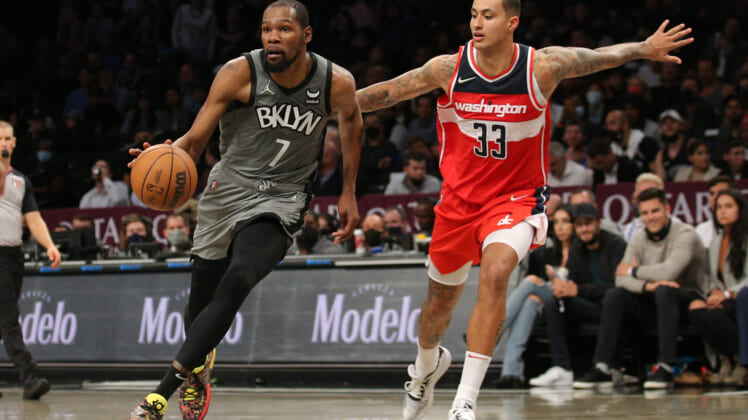 With Brooklyn Nets superstar scorer Kevin Durant demanding a trade, just about every team in the NBA has likely placed a call to general manager Sean Marks to find out the potential cost. You can add Washington Wizards GM Tommy Sheppard to that group.

According to Sam Amico of Hoops Wire, the Wizards have “an interest” in Durant, but the talks reportedly never got far, as they were described only as “exploratory” to this point. It never hurts to ask, right?

Both trades appear unlikely without the Wizards being willing to part with Bradley Beal, and that’s not happening either. The long-time Wizard recently signed a five-year, $251 million extension which includes a full no-trade clause.

It’s expected that any deal — for Durant or Mitchell — would be an attempt to complement Beal on the roster and help make an all-out push to compete right away in 2022. But do the Wizards have the assets to pull such a big blockbuster move off ahead of the season?

Related: How a Donovan Mitchell trade to the Washington Wizards could look

Can the Washington Wizards swing a Kevin Durant trade?

Just like a potential trade for Donovan Mitchell, pulling off a deal for Kevin Durant would be just as difficult. There’s a reason why there has been very little movement on their trade fronts this offseason. Both are among the best at their position and are premium scorers who can be a contender’s best player.

Of course the Nets aren’t willing to part with Durant without getting an absolute haul back for the 12-time NBA All-Star. He’s still one of the best players in basketball and has shown no signs of slowing down.

One factor that could drive Durant to request a trade specifically to Washington is his local ties, with him being a D.C. native. But that won’t mean the Nets will be looking to take a less favorable deal just to please Durant.

Any Durant to Washington trade would likely include rookie Johnny Davis, but he doesn’t meet the criteria of the Nets seeking at least one if not two All-Star caliber players in return. The Wizards just don’t have anyone like that on their roster they’re willing to part with.

Related: Why the Washington Wizards should make an all-out push for Kevin Durant