How a Donovan Mitchell trade to the Washington Wizards could look 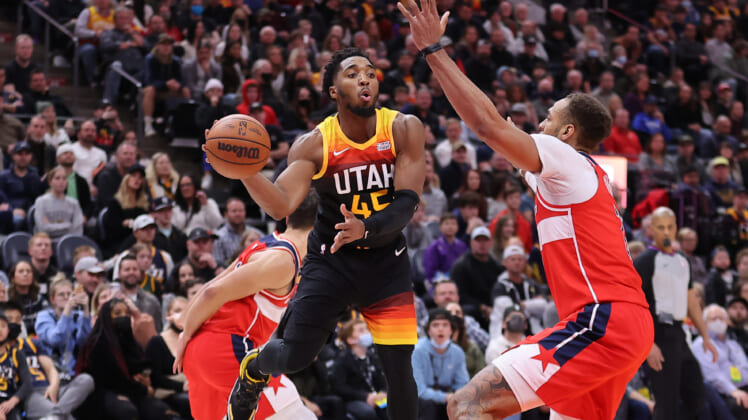 As everyone talks about a potential Donovan Mitchell trade to the New York Knicks, how about another interesting east coast team, like the Washington Wizards? They already have one superstar scorer with Bradley Beal. Adding another of Mitchell’s caliber would give the team the most potent backcourt in basketball, but could they actually put together an enticing trade offer?

Shams Charania of The Athletic passed along word that the Wizards have ‘expressed interest‘ in trading for Mitchell. But it’s not known how far the talks went. Still, the Wizards getting involved at all indicates a desire to swing for the fences, but how do they actually do it?

Donovan Mitchell wouldn’t be an easy get for Wizards

It should be noted, that the Utah Jazz aren’t looking to rush any potential Donovan Mitchell trade. They may not want to part with him at all. He’s still under contract through the 2024-25 season and has a player option for another year.

He hasn’t demanded a trade, and may be just fine with waiting for the Jazz to rebuild. For the first time in his career, Mitchell will be the unquestioned leader with no one else looking over his shoulder. Mitchell might be looking forward to a year without Rudy Gobert, even if there are some early struggles under first-year head coach Will Hardy.

Jazz executive Danny Ainge is said to be asking for up to seven first-round picks from the Knicks in trade discussions, in addition to whatever players can be pilfered. This doesn’t disqualify the Wizards, as aside from their 2023 first, they have all their own first-round selections through 2029.

While they may have all these picks, it doesn’t mean they want to trade them.

How a Donovan Mitchell trade to Wizards works

Technically, Johnny Davis can’t even be traded until 30 days after he’s signed his rookie contract, which means he’s off-limits until August 1, which is less than a week away. Maybe that’s why we haven’t seen much Mitchell trade talk as of late as teams wait out the 30-day period.

Even then, including the 10th pick in the 2022 NBA Draft in Davis, plus Kuzma, who’s an above-average two-way stud, in addition to two former No. 9 overall picks in Hachimura and Avdija probably still doesn’t move the needle for the Jazz. Not for Mitchell anyway.

The draft picks are the main attractor here, and the Jazz just might view the Wizards’ picks to be more valuable than what may come from the Knicks, Heat or other teams in discussions to land Mitchell.

There’s no guarantee Mitchell and Beal would be an ideal backcourt fit, neither are distributors and do best with the ball in their hands as a primary scorer. The Wizards have yet to make it past the Eastern Conference Semifinals with Beal aboard, maybe they believe Mitchell can help them achieve their goals much quicker than their current timeline would suggest.

At the end of the day, the Wizards likely don’t have the trade capital to offer the best package for Mitchell. From a player value standpoint, they do not, but from a draft pick perspective, they might be able to offer one of the best deals out there.

Related: Why the Washington Wizards should make an all-out push for Kevin Durant