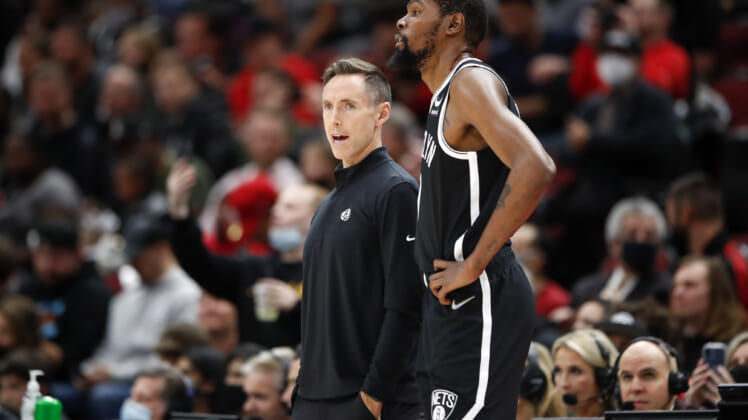 NBA schedules are set to be revealed likely in the next two weeks, but the Brooklyn Nets may suddenly have a big problem on their hands. We already knew Kevin Durant wasn’t happy with his team, demanding a trade out of town, but we’ve heard little movement toward getting a deal done.

Maybe now we know why.

Durant had a face-to-face meeting with Nets owner Joe Tsai this past weekend, and he’s basically saying it’s either me or them.

According to Shams Charania of The Athletic, Durant is demanding the team fires head coach Steve Nash and general manager Sean Marks. If the Nets refuse, then Durant’s trade demand still stands.

In the meeting, Durant reportedly stated he doesn’t ‘have faith’ in where the team is currently headed under the guidance of Marks and Nash, and he gave his reasons why. But those were not revealed to the public.

Durant is entering the first year of a four-year contract extension he signed last August. Others around the league have speculated about Durant skipping training camp if he doesn’t get his wish. So what happens next?

It’s anyone’s guess what the Nets will decide from here. What do they value more? Durant or their GM and head coach? Durant is aging and has a limited shelf life, whereas Nash and Marks should theoretically be around longer.

Then again, Nash and Marks are unproven, and Durant is a fricken legend. At the same time, it wouldn’t be a good look for a team to cave to their star’s demands. It sets up a trickle effect that would likely lead to this becoming the new norm. The next time a star doesn’t like how a coach handles practice, or other team rules, they’ll demand a trade, or for the coach to be fired. It’s a dangerous road.

Yet, who’s to say LeBron James doesn’t already have similar power? But that’s LeBron, and this is Durant. These guys are Hall of Fame players. Maybe that makes the situation different than if, say Donovan Mitchell made similar demands?

Who knows, but it sets up an interesting next few months. Will Durant trade talks pick up? Their asking price isn’t likely to suddenly be less. In fact, now that this information has come out, shouldn’t teams now be willing to offer even less, knowing the Nets are not in an advantageous position with their star player?

It reminds me of the Jimmy Butler situation which led to his trade from the Minnesota Timberwolves. Suddenly word emerged shortly before training camp that he demanded a trade privately to coach Tom Thibodeau over the summer, only he decided to sit on the demand, hoping Butler’s feelings would eventually change. They didn’t.

Once everyone knew Butler wouldn’t suit up for the Wolves any more, his price tanked, leaving the franchise forced to accept a lesser offer. Butler’s trade return was incredibly low for his value. The Wolves got back Robert Covington, Dario Saric, Jerryd Bayless and a 2022 second-round pick. Nothing close to what a two-way All-Star should bring back.

In essence, maybe Durant’s trade cost won’t be as much as we’ve heard all along. Or maybe the Nets try and play hardball with their disgruntled star. My hunch is that firing their coach and GM months before the year begins is out of the question.

We’ll see what they choose, but the sooner the Nets find a resolution, the easier moving on will be.

Celtics, Heat, Raptors all still in on Durant trade

The same three teams who have been most linked to a potential Durant trade, are still involved. This means the Boston Celtics, who reportedly discussed a deal centering around Jaylen Brown are still in the mix. Yet it was also reported that the Cs must include Brown + Marcus Smart in any deal for KD, which has been a non-starter thus far.

Another team, the Miami Heat have a collection of tradeable talent. But that doesn’t mean they’re willing to part with Bam Adebayo, who may be the top asset the Nets desire from Miami. Without a star such as Bam included, a deal centering around Tyler Herro, draft picks likely won’t be enough.

Then we have the Toronto Raptors who are deadset against dangling 2021 NBA Rookie of the Year Scottie Barnes in any trade talks. Are the Nets enamored with the other tradeable pieces such as OG Anunoby?

They may not like them, but the Nets have some options if a Durant trade becomes inevitable.