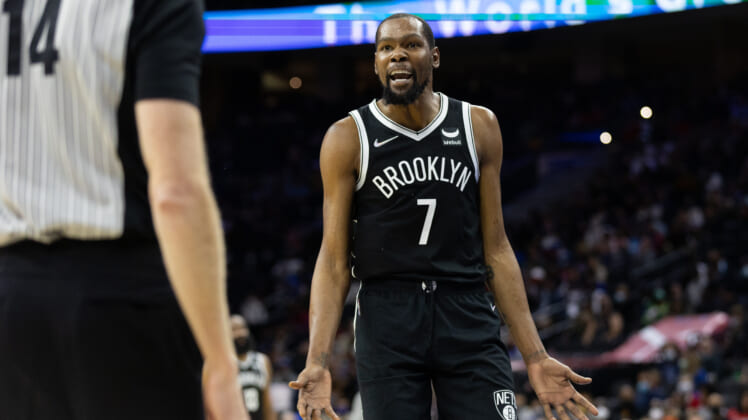 In case you’ve forgotten, Kevin Durant requested a trade from the Brooklyn Nets over a month ago, with the request coming in late June. While rumors were all over the place for the next few weeks that followed, there has been very little movement on the actual trade front.

That’s the same story around the Association, where player movement has come to a crawl aside from those hoping to compete for a spot at the end of the bench.

Why have trade talks been so stagnant? Ian Begley of SNY has the scoop.

In this case, the anonymous NBA source likely is referring to negotiating a three-team deal. This would allow both Brooklyn and whoever’s acquiring Durant to better allocate the moving parts.

Maybe a team wants to offer a point guard or power forward, which the Nets don’t have a need for with Kyrie Irving and Ben Simmons already on the roster. Looping in a third or even fourth team could help a deal come together, but to this point, no one is interested.

Related: Toronto Raptors not even thinking about parting with Scottie Barnes in Kevin Durant trade

Kevin Durant trade talks could ramp up at any moment

No matter what, a Durant trade is hard to pull off. He’s a top-tier talent that doesn’t hit the trade block often. Not only that, the Nets likely aren’t itching to get him off the roster. They brought him in to help win a championship, and they have yet to come close.

But their goals haven’t changed, and as long as they retain Irving and Simmons, they still feel the championship window is as open as ever.

Matching salaries in a Durant trade has its own complications. He’s due $42.9 million in 2022, so teams have to put together a package that comes within 125% of his salary.

More importantly, teams have to present something the Nets are interested in. We’ve heard of the Miami Heat, Phoenix Suns, and Toronto Raptors being the teams heavily linked to a Durant trade.

In Toronto’s case, they don’t want to part with their top asset, the 2021 NBA Rookie of the Year, Scottie Barnes. Perhaps that’s a dealbreaker for Brooklyn.

In Miami, they’re not going to give up Jimmy Butler, and Bam Adebayo likely isn’t available either since replacing him from within is not an easy task.

Same with Phoenix. Working out a sign-and-trade with Deandre Ayton may have been the best option, but that ship has sailed since he agreed to his four-year, $133 million extension.

In all, the Nets just haven’t gotten the value they’re looking for. Trading Durant should net a massive haul, including at least one proven piece, along with several first-round picks. If they can’t find an All-Star, or at least a borderline star, who has the potential for more, what’s the rush?