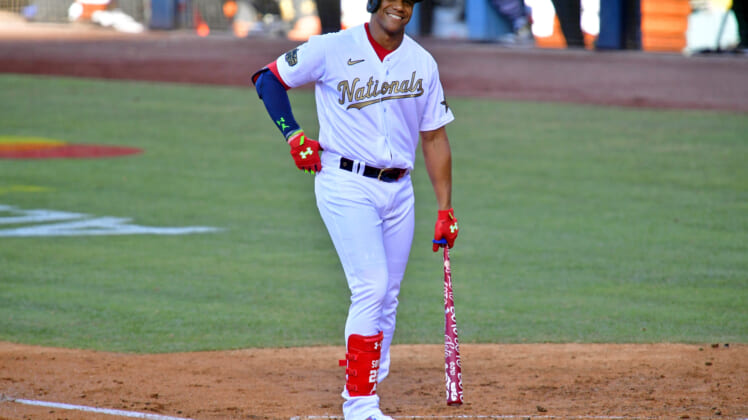 The sudden availability of Washington Nationals outfielder Juan Soto before the MLB trade deadline sparked immediate interest from teams across baseball. While the San Francisco Giants stood out as a potential landing spot, it appears the All-Star slugger is unlikely to wind up in the Bay Area.

Washington made Soto available after he rejected their 15-year contract extension, making him the best player to be made available for trade in years. Only in his age-23 season, Soto has established himself among the perennial MLB MVP candidates and he is on pace for a Hall of Fame career.

San Francisco finds itself on the decline after a breakout 2021 season. The Giants won 107 games last year, ending their four-year playoff drought with Buster Posey and Brandon Crawford leading the way. However, the club entered the weekend barely above .500 and lacks a face of the franchise following Posey’s retirement.

Related: How a Juan Soto trade to the San Francisco Giants might look

It made Soto a perfect target for the Giants. The club’s lack of long-term payroll commitments would provide an opportunity to offer the All-Star outfielder a $500 million contract. Paired with the talent around him, it would help San Francisco compete with the Los Angeles Dodgers in the NL West.

When MLB insider Buster Olney appeared on 95.7 The Game and was asked about the possibility of the Giants landing Soto, he made it clear it’s extremely unlikely to happen.

Slipping further behind the Dodgers and San Diego Padres in the MLB standings, there is still uncertainty regarding whether or not the Giants will be buyers or sellers this season. There are multiple needs in the lineup and the starting rotation could be improved with another pitcher, but San Francisco must also weigh whether making several moves would even make it a legitimate World Series threat.

Ultimately, Giants’ president of baseball operations Farhan Zaidi might choose to avoid paying the cost it would require to acquire and then sign Soto. Instead, he could strengthen the farm system by trading certain pieces this summer and then make a run at Aaron Judge in MLB free agency this winter.