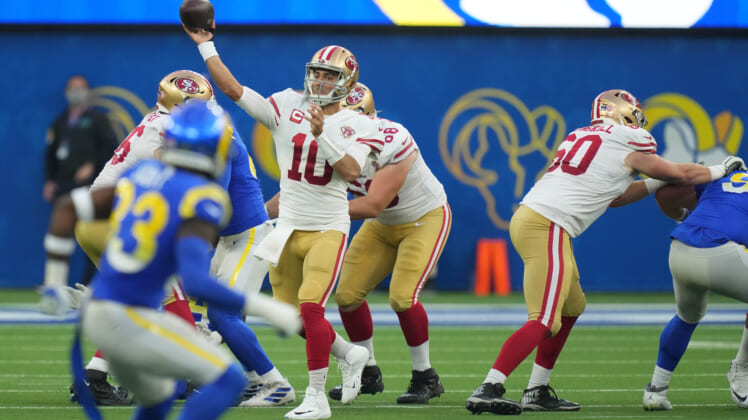 The San Francisco 49ers will face the Dallas Cowboys in an NFC Wildcard game next week after pulling off the unlikeliest of wins on the road against the Los Angeles Rams on Sunday.

San Francisco found itself down 17-0 in the first half and was being completely dominated. Riding an elite rushing attack and some gutsy play from injured quarterback Jimmy Garoppolo, the 49ers somehow found a way to come out on top.

Once Garoppolo threw an interception with his 49ers driving for the potential lead midway through the fourth quarter, it seemed like the Rams would come out on top. A 92-yard touchdown drive engineered by Matthew Stafford on the Rams’ following possession seemed to be the nail in the 49ers’ coffin.

That’s when Garopolo led the 49ers on their own 88-yard touchdown drive in just over a minute to force overtime.

With the New Orleans Saints having defeated the Atlanta Falcons in another Week 18 afternoon game, the 49ers headed into overtime knowing they needed a win or tie to earn a playoff spot.

Boy, did Garoppolo and Co. step up. That included the embattled San Francisco 49ers quarterback leading the team on a 69-yard field goal drive to move up 27-24.

Despite this, the Rams still had a chance to end San Francisco’s season with just over two minutes remaining in overtime. Shockingly, rookie 49ers cornerback Ambry Thomas ended the game with an interception of Stafford to send San Francisco to the playoffs and into Dallas to take on the Cowboys.