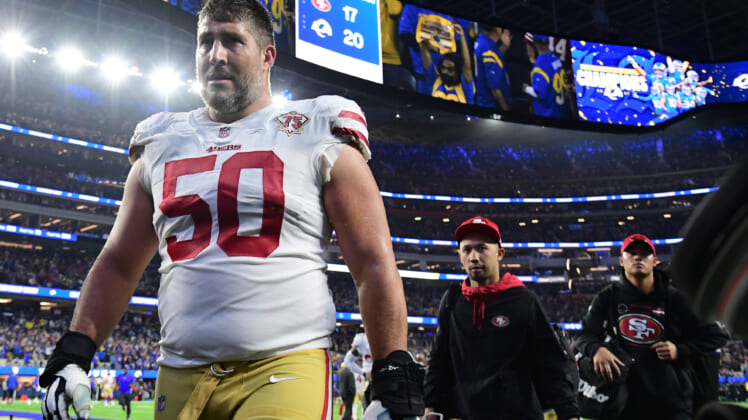 Seven-time Pro Bowl center Alex Mack still has not made it clear to the San Francisco 49ers if he plans to play in 2022 or will decide to call it a career after 13 seasons in the NFL.

In March of 2021, Cleveland Browns and Atlanta Falcons veteran offensive line general Mack and the 49ers agreed on a three-year deal worth just under $15 million. Despite a long career and entering his age 35 season, Mack was all San Francisco could have hoped for as he earned his seventh trip to the annual Pro Bowl. His first since 2018.

In April, 49ers general manager John Lynch explained during a pre-draft press conference his intentions to have a conversation with the 35-year-old soon about his plans and if that would include putting on a San Francisco 49ers jersey for a second straight season. As well as his belief Mack returning for this season was still in play.

Related: Get an advanced look and predictions for the 2022 San Francisco 49ers schedule

“I think that, yeah, that still remains a possibility,” Lynch said when asked if Mack could play in 2022. “He hasn’t spoken on it with finality, but I think it does remain fluid.”

However, more than a month has passed and it seems that despite the organization beginning OTA’s in San Francisco, there is still no clarity on Mack’s plans this year. NBCSportsBayArea.com contributor Matt Maiocco reported on Tuesday that Mack was not there for the first day of workouts and still has not informed the team on where his future lies heading into the summer.

Alex Mack is not breaking any contractual obligations by missing these voluntary organized team activities. With that said, the rubber will really need to hit the road when it comes to his plans for the rest of 2022 when the San Francisco 49ers begin mandatory minicamp on June 14.