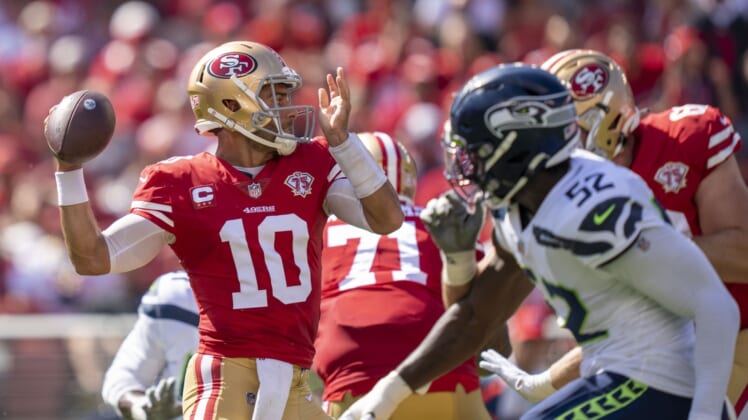 Injured San Francisco quarterback Jimmy Garoppolo missed another practice Thursday but has not yet been ruled out for the 49ers’ Sunday road game against the Arizona Cardinals.

Niners coach Kyle Shanahan said Thursday that Garoppolo “wants to give it a go” Friday on his strained right calf.

“We’ll see him out on the practice field (Friday),” Shanahan said on KNBR Radio. “If he looks good, then he’ll have a shot. If he can’t, then we’ll shut him down.”

Rookie Trey Lance is poised to make his first NFL start for San Francisco (2-2) against the Cardinals (4-0) if Garoppolo is unable to go.

“If he feels good enough to where he can protect himself, he feels confident to step into all his throws, Jimmy’s been here long enough, and he’s not a guy who’s just sitting here and rehabbing all week and checked out,” Shanahan said on KNBR. “He’s a guy who, besides the practice field, you would think he was starting.”

Garoppolo sustained the injury in the first half of San Francisco’s 28-21 loss to Seattle last Sunday. Garoppolo completed 14 of 23 passes for 165 yards, one touchdown and one interception in the first half. The score was knotted 7-7 at halftime.

Lance, the No. 3 overall pick in this year’s draft, took over at quarterback to start the second half.

Offensive tackle Trent Williams (shoulder) was a full participant in Thursday’s practice and is good to go Sunday. He missed Wednesday’s practice.

However, cornerback K’Waun Williams (calf) has been ruled out for Sunday, according to Shanahan.