The Sacramento Kings opted to retain head coach Luke Walton before the 2021-’22 NBA season after his second 31-win campaign with the franchise. But with the team off to another slow start, Walton might be in jeopardy of being one of the first NBA coaches fired.

Monte McNair, hired as the Kings’ general manager in September 2020, wanted to give Walton a full NBA season to try and make things work. But with Sacramento off to another rough start, time might be running out for the 41-year-old head coach.

According to The Athletic’s Sam Amick and Shams Charania, Walton’s job status will “likely be in peril soon” if the team’s current slide continues. Before defeating the Detroit Pistons on Monday night, Sacramento was on a four-game losing streak. 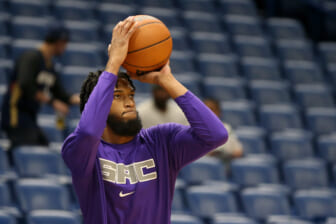 Money could be a factor in any potential decision. Divac signed Walton to a four-year contract and the remaining two years are guaranteed, according to The Athletic. For a franchise that reportedly lost $100 million in revenue due to the COVID-19 pandemic, Walton’s remaining $11.5 million salary would be a significant price to pay.

Considering the Kings entered the season with a playoff-or-bust mentality, Walton likely needs a lot to go right to save his job. If an in-season change is made, Alvin Gentry would likely step in as the Sacramento Kings interim coach and he could be a candidate to replace Walton permanently.