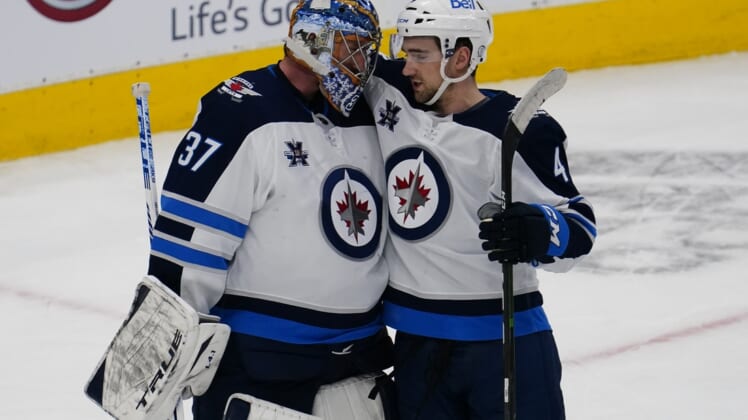 Andrew Copp had a goal and an assist while Connor Hellebuyck sparkled with a 36-save performance as the visiting Winnipeg Jets claimed a 4-3 victory over the Toronto Maple Leafs on Tuesday night.

Neal Pionk had three assists and Nikolaj Ehlers collected two assists for the Jets, who have won seven of nine games and vaulted into second place, behind Toronto, in the North Division. Winnipeg also got goals from Josh Morrissey, Kyle Connor and Mason Appleton.

Toronto’s Auston Matthews scored twice, giving him a league-leading 20 on the season. He joined Dave Keon as the only players in franchise history to score 20 or more goals in each of their first five career NHL seasons.

Zach Hyman also scored and Frederik Andersen stopped 19 shots for the Maple Leafs, who have lost three straight games for the first time this season.

Kasperi Kapanen’s goal in the final minute of the second period held up as the winner. Sidney Crosby added a goal and an assist, and Jake Guentzel and Teddy Blueger also scored for the Penguins. Goaltender Tristan Jarry made 33 saves, including three strong stops in the closing minutes, for his 10th win.

Jack Johnson and Ryan Strome scored for the Rangers. Keith Kinkaid, in his first start of the season, made 23 saves.

Joel Kiviranta and Roope Hintz each had a goal and an assist, and Jason Robertson added four assists as Dallas routed visiting Chicago.

Anthony Beauvillier scored in the third round of a shootout as New York continued its home dominance to defeat Boston.

The Islanders improved to 4-0-0 against the Bruins and won their sixth straight game overall. New York also boosted its home record to 11-0-2 and won for the first time in five games beyond regulation this season.

Seymon Varlamov made 32 saves for New York, which got a regulation goal from Brock Nelson. Boston’s David Pastrnak scored, and Jaroslav Halak finished with 26 saves.

Coleman took a pass from Tyler Johnson and flipped the puck over goaltender Thomas Greiss’ right arm for the winner. Brayden Point, Johnson and Erik Cernak scored regulation goals for the Lightning, who are 8-0-1 over the past nine games.

Andrei Vasilevskiy made 20 saves for Tampa Bay, which improved to 19-0-1 in its past 20 regular-season games against the Red Wings. Adam Erne, Patrik Nemeth and Dylan Larkin scored for Detroit, and Greiss made 25 saves.

Jakub Vrana capped a two-goal performance by scoring 1:30 into overtime to fuel Washington to victory over visiting New Jersey.

New Jersey erased a 4-1 deficit by scoring three times in the third period before Vrana used his speed coming off the bench to end the contest. Vrana beat Scott Wedgewood (25 saves) on the forehand for his 10th goal of the season and fifth in his past six games.

T.J. Oshie, Daniel Sprong and Dmitry Orlov also tallied for the Capitals, who have defeated the Devils four times during their 7-1-1 stretch.

Jordan Staal scored his second goal of the game with 34.9 seconds left in overtime as host Carolina extended its winning streak to six games by defeating Nashville.

Sebastian Aho had a goal and an assist for the Hurricanes, who have their first six-game winning streak in 10 years. Vincent Trocheck had two assists, and Carolina goalie Alex Nedeljkovic made 21 saves.

Sean Couturier and Nolan Patrick each scored in a shootout and host Philadelphia rallied from a two-goal deficit to defeat Buffalo.

James van Riemsdyk, Kevin Hayes, Claude Giroux and Shayne Gostisbehere each scored a goal in regulation for the Flyers, who snapped a two-game losing streak.

Buffalo got two goals from Sam Reinhart and one tally apiece from Riley Sheahan and Brandon Montour. Taylor Hall had two assists.

Juho Lammikko, Patric Hornqvist, Owen Tippett and Carter Verhaeghe each scored for the Panthers, who are 4-1-2 over the past seven games. Bobrovsky, the former Blue Jacket, was solid in net and also benefited from Columbus hitting iron on three occasions.