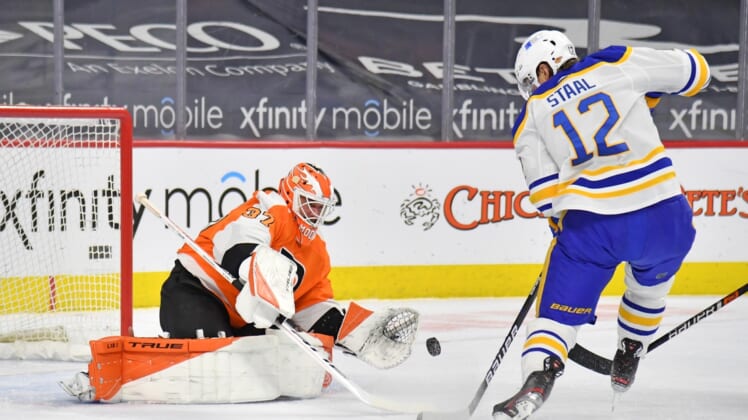 Sean Couturier and Nolan Patrick each scored in a shootout and the host Philadelphia Flyers rallied from a two-goal deficit to defeat the Buffalo Sabres 5-4 on Tuesday.

James van Riemsdyk, Kevin Hayes, Claude Giroux and Shayne Gostisbehere each scored one goal in regulation for the Flyers, who snapped a two-game losing streak.

Joel Farabee and Couturier had two assists apiece for the Flyers.

Flyers goaltender Carter Hart allowed three goals on eight shots and was lifted for Brian Elliott to open the second period. Elliott made 11 saves and stopped both attempts in the shootout.

Sam Reinhart scored two goals while Riley Sheahan and Brandon Montour added one goal each for the Sabres, who have now dropped eight in a row.

The Flyers jumped out to a 1-0 lead at 1:56 of the first period when van Riemsdyk received a crisp pass in front and fired a wrist shot into the net.

Buffalo tied the game at 1 when Reinhart scored his 10th goal of the season at 4:33.

The Sabres stayed aggressive and went ahead 2-1 at 9:39 of the first when Sheahan pounced on a loose puck and scored on the backhand. Reinhart’s second goal of the period extended Buffalo’s advantage to 3-1 at 16:39.

Philadelphia closed within 3-2 at 2:58 of the second when Hayes recorded his ninth goal of the season.

But the Sabres responded quickly as Montour’s shot deflected off Gostisbehere and past Elliott for a 4-2 advantage at 6:20.

Seconds after a power play expired, the Flyers cut the deficit to 4-3 at 15:05 of the second when Giroux held off a defender and scored.

The Flyers generated quite a bit of offensive pressure during the first 10 minutes of the third but were unable to equalize.

Gostisbehere eventually blasted a slap shot through traffic on the power play to tie the game at 4 at 14:14.

Neither team was able to score in overtime.