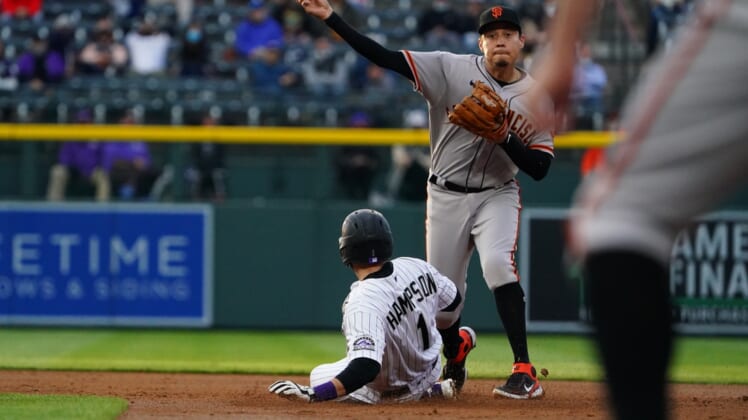 Charlie Blackmon hit a three-run, walk-off homer, and the Colorado Rockies scored six runs in the seventh inning to beat the San Francisco Giants 8-6 in the nightcap of a doubleheader on Tuesday in Denver.

C.J. Cron had two hits, including a homer, for Colorado in the second game, and Trevor Story and Ryan McMahon added two hits each.

Wilmer Flores homered among his two hits, Brandon Belt also went deep, and Steven Duggar had two hits each for the Giants, who won the opener 12-4. Belt had two homers and drove in seven runs on the day.

The Rockies trailed 6-2 entering the seventh in the second game before putting together a winning rally. Alan Trejo reached on a one-out single, and Garrett Hampson singled with two outs. Story drove them both in with a double, and McMahon’s RBI single cut the deficit to one run.

Camilo Doval (0-1) relieved Jake McGee and gave up a bloop single to Cron to put runners at the corners. Blackmon then drove a full-count pitch into the seats in right field to win it. It was his second homer of the season.

San Francisco jumped out to a lead in the first inning when Mike Tauchman doubled and Belt homered off of Ryan Castellani, his sixth of the season.

The Rockies got even in the fourth inning. McMahon led off with a single, and Cron homered to left on the next pitch to tie it. It was his fifth of the season.

The Giants came right back in the fifth inning. Flores led off with a walk off reliever Justin Lawrence. Belt struck out and Longoria walked. Mychal Givens came on and walked Brandon Crawford to load the bases. Duggar followed with a single to left to drive in Flores and Longoria.

San Francisco padded the lead in the sixth. Tauchman reached on a one-out error by first baseman Cron, and Flores homered to left, his second of the season.