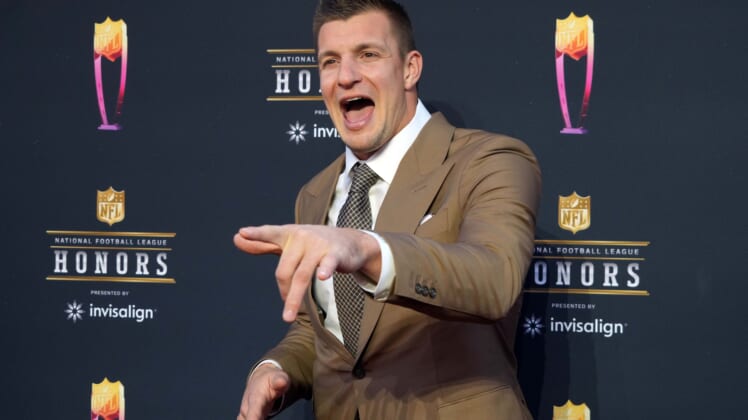 Could a Rob Gronkowski retirement be around the corner? Or will Tom Brady have Gronk by his side once again for their third season together with the Tampa Bay Buccaneers?

Now that the draft had concluded, as we stroll through the NFL offseason schedule, the next big event brings training camp openings around the league. With teams already filling the large majority of their team needs, Gronk is free to sign with any franchise as an unrestricted free agent.

He’s spoken of a desire to play with Joe Burrow, but that may be a thing of the past with Brady making it known his retirement was a fluke.

From the Buccaneers’ perspective, they’re willing to be patient with the five-time Pro Bowl tight end, allowing him to take as much time as he needs before making a decision on his playing future.

But Gronk believes he’s not late to the party or anything of the sort, he says he wouldn’t need much time at all to get ready for some football.

Gronkowski, who’s co-hosting a Nickelodeon Kids’ Choice Awards show later on Saturday took the time to visit with the New York Post about a few wide-ranging subjects, but his quote about a potential return may have taken the cake.

“I feel like I can get ready at any time for football, like it’ll take me two weeks only, so, I’m not really worried about it,” he said. “It’s just cool just to be doing other things and enjoying them.”

For now, the four-time Super Bowl champ is living it up, enjoying the non-retirement offseason life, but chances are, we’ll see him on the football field again, performing his Gronk Spikes after scoring a touchdown on gameday for what would be a 12th NFL season.