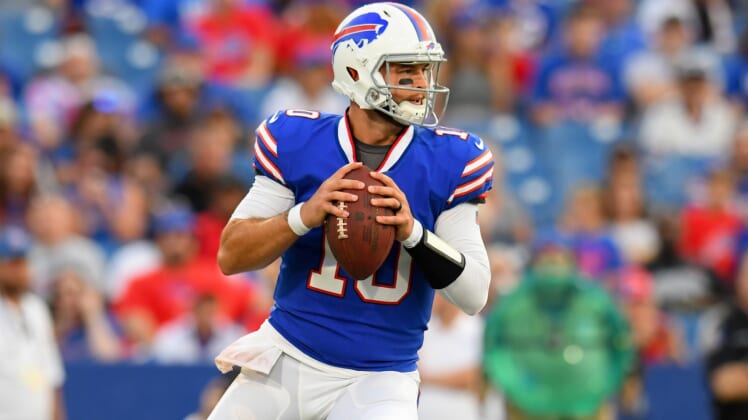 A bad night on the field during Friday’s game against the Cleveland Browns got even worse for quarterback AJ McCarron.

The 27-year-old, who came to the Buffalo Bills in hopes of being the starting quarterback, reportedly suffered a hairline fracture of the collarbone in the first quarter on Friday.

#Bills QB AJ McCarron suffered a hairline fracture of the collarbone in the first quarter of tonight's preseason game vs. #Browns, The Buffalo News has learned.

It’s an awful twist of fate for McCarron and one that could now take him out of the running to be Buffalo’s starting quarterback for the regular season opener.

The move will likely open the door for rookie Josh Allen to become the starting quarterback. Allen made some impressive throws during Friday’s game, including a touchdown pass, working with the second-team offense.

Allen should see a significant percentage of reps with Buffalo’s first-team offense this week during practice. Head coach Sean McDermott could name him the starting quarterback this week, which could lead Allen to play the entire first half in Buffalo’s third preseason game.

McCarron could be out of action for two-plus months, which would make him a candidate for the injured reserve-designated to return.