In honor of April 20—which is referred to as 4/20 or unofficially, National Pot Smoker’s day—let’s look at some of the most famous athletes that were also consumers of marijuana.

We’ll kick off this article with a tweet from NFL’s Green Bay Packers’ quarterback Aaron Rodgers, whose late-night postings of some really bizarre tweets made the world wonder if he’s enjoying 4/20 as much as others.

Doubtful, but check this out: 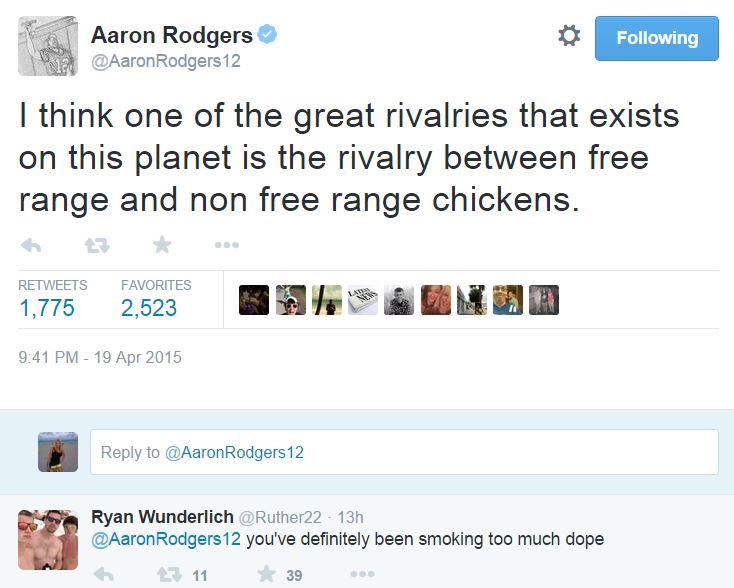 Judge for yourself while we check out some sports figures who got by with a little help from their friend, weed.

Simpson was arrested in 2014 for driving around with his marijuana, which resulted in his release from the Minnesota Vikings. Previous to this incident, Simpson spent 15 days in jail in 2012 for trafficking his favorite substance after a sizable 2.5 pounds was shipped to his residence.

You can’t get more “busted” than getting caught smoking your bong on camera. Phelps ultimately lost his sponsorship by Kellogg, which experts claim could have netted him $100 million over his lifetime. He was suspended from USA Swimming for three months. 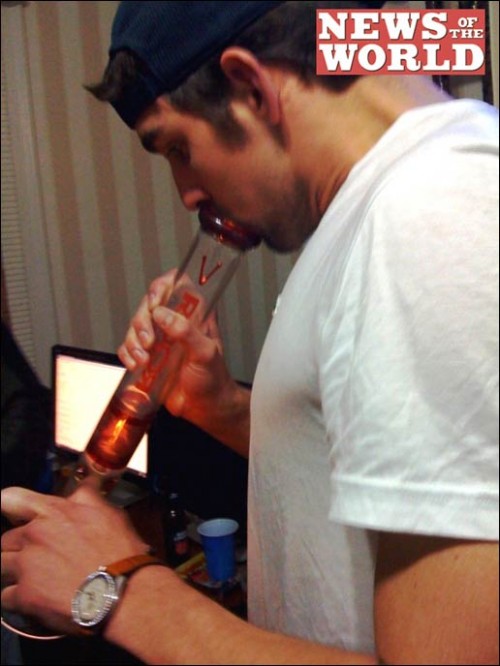 Abdul-Jabbar was never caught with weed in his system while playing for the Milwaukee Bucks or the Los Angeles Lakers. But, the six-time league MVP and 19-time All-Star now uses marijuana to treat nausea-induced headaches. It doesn’t even matter why he has the headaches, though; Pot knocks ’em right out.

Former outfielder Dukes admitted he would smoke some pot before suiting up to hit the field for the Tampa Bay Rays. Now retired from the baseball, Dukes took on a career as a rap artist who went by the nickname “Fly Eli.”

Someone should’ve told Vick that pot smoking and dog fighting are not appropriate hobbies or methods of off-field relaxation. In 2007, Vick failed a drug test, which ended up being the least of his problems. He spent 23 months in prison for federal charges violating laws against dog fighting. Was weed present in Vick’s altered thought processes? We’re not sure, but there’s a high possibility.

Williams, a high-school teammate of Randy Moss, was kicked out of the University of Florida a positive drug test resulted in his fourth collegiate suspension. Talk about a perfect segue.

Here’s Moss’ own version of using the green stuff while playing in the NFL.

“‘I have used, you know, marijuana … since I’ve been in the league,’ Moss said in an interview for HBO’s ‘Real Sports with Bryant Gumbel.’ But as far as abusing it and, you know, letting it take control over me, I don’t do that, no.

‘But, you know, I don’t want any kids, you know, watching this taking a lesson from me as far as ‘Well, Randy Moss used it so I’m going to use it.’ I don’t want that to get across. Like I say … I have used [marijuana] in the past. And every blue moon or every once in a while I might.'”

Perhaps that explain some of his weird antics. Moss pretended to pull down his pants and moon the Green Bay Packers’ crowd during a Vikings playoff win, an act earned him a $10,000 fine. Unfortunate, too, because that could have bought Moss some pretty primo buds, you know?

While playing for the Houston Astros in 2011, Schafer lit a joint while waiting at a traffic light but failed to notice a police officer in the next lane.

Making the arresting officer’s job easy, Schafer fessed up to having an extra stash in his car. Then again, maybe he was just trying to be nice and share.

A hippie from the 1960’s, it was no secret that Walton and weed went hand-in-hand, or hand-to-mouth in his case. Apparently marijuana was Walton’s version of Wheaties, since he won a pair of NCAA and NBA championships.

After a professional career took him from the Portland Trail Blazers to the San Diego and Los Angeles Clippers to the Boston Celtics, Walton took to sports broadcasting with ESPN, where he’s ranted about the United States’ drug laws and NCAA’s rules.

We can probably imagine Walton now celebrating 4/20 with some Jimmy Buffett playing in the background. Unreasonable? Just look at that shirt. 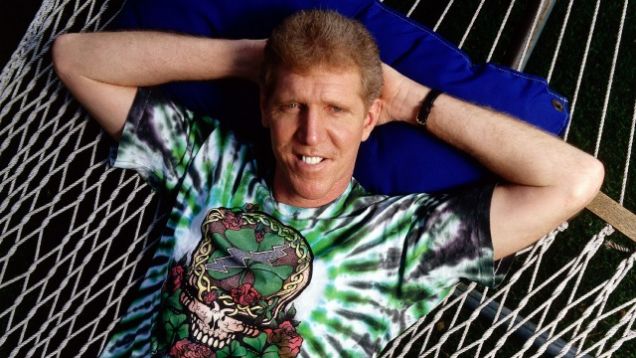 Lynch was arrested in 2009 for carrying a concealed weapon, and a search of his vehicle allegedly turned up four not-so-concealed marijuana-filled blunts.

If that is not worth bragging about, then the Seattle Seahawks’ running back can be proud that a marijuana dispensary in Seattle recently named one of their stronger strains “Beastmode 2.0.” I mean, how cool are you when you get to smoke a Beastmode? Pass the Skittles, please, because you’re going to need a bunch of them later.

Ever have to use the excuse that you’re just holding the pot for a friend? Well, that’s the cop-out Anthony used back in 2004 when he was busted for possessing marijuana while boarding the team’s plane.

Anthony claimed the weed was left in his bag by a friend who borrowed it previously. Is anyone buying that?

Williams tested positive four times over his 11-year career. Recently, Williams claimed if he had a do-over, he wouldn’t have played in the NFL.

Perhaps he would’ve pursued a lifetime of yoga and studying holistic medicine, two activities in which Williams partook between 2003 and 2005.

In 2009, San Francisco Giants’ pitcher was arrested for marijuana after an officer smelled the substance coming from his car during a traffic stop. Lincecum gave up the pipe he had stashed in the center console of the car. According to the arresting officer, Lincecum had 3.3 grams of weed, approximately the size of “the whole thumb.”

Prior to the 2014 regular season, Bell and former Pittsburgh Steelers running back LeGarrette Blount were charged for possession of marijuana. Even better, though, Bell did not realize that getting high meant you were driving under the influence.

Perhaps he can take his three-game suspension for the 2015 season to review what constitutes a DUI.

Who? Rebagliati competed in the first Olympics where snowboarding was an official event. With a gold medal under his belt, Rebagliati’s days in the spotlight ended after his medal was stripped then given back because it wasn’t technically a banned substance.

Now, Rebagliati is busy telling fellow Canadians that pot can be part of a healthy lifestyle. Okay, then. Anyone want some One-A-Day Multi-Dope vitamins?

It’s really hard to keep track of Gordon these days. He missed the first two games of the 2013 season after violating the NFL’s substance abuse policy. Gordon had another run-in with the law in 2014, which earned him a 10-game suspension last year. Gordon once again violated the same NFL policy for drinking a beer—seriously—and now faces a season-long suspension for the 2015 season.

If he indeed misses the whole year, maybe Gordon will moonlight as a car salesman once again.

Iverson was arrested back in 1997 for possessing marijuana and a firearm. This follows him being named NBA Rookie of the Year for Philadelphia. He pleaded no contest, and the drug charges were dropped.

“The Answer” could be smoking a little pot to reminisce on his lengthy career, so long as he didn’t throw away all his money at a strip club.

Lee missed a chance to compete in the 2012 Olympics because she tested positive for marijuana. Per USA Today, here’s Lee’s take on weed:

And, you just missed your shot at the Olympics, girl. That’s kind of not better than being a pothead.

At least Jeff Spicoli would have been proud? 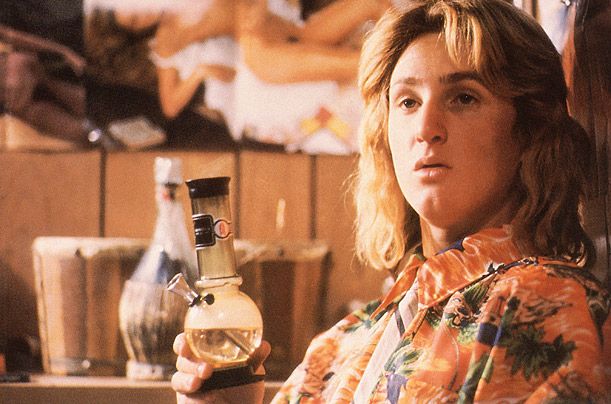 Who carries around 29 pounds of marijuana and thinks they’re going to get caught? A major stoner, that’s who. Blount was arrested in 2008 for possessing the amount of pot that weighs about what a three-year-old child does.

Said judge Craig Hedric when Blount claimed the weed was for personal use:

“Cheech and Chong would have had a hard time smoking that much.” 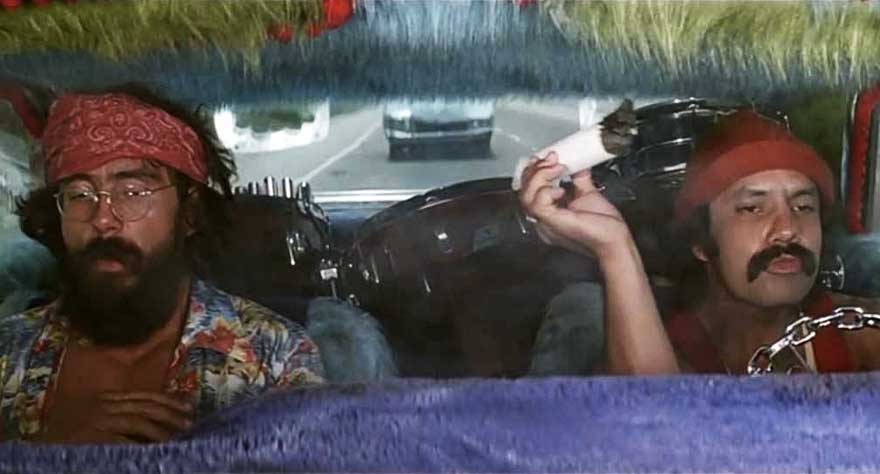 Part of Schwarzenegger’s diet back in his body-building days was a little leafy green substance to accent a daily meal of bland, boring chicken and white rice.

Here’s a little video that shows a very young Schwarzenegger getting a little wasted.

While some of the above mentioned occurrences may have just been one-time deals or were part of one’s daily regimen, we’ll leave that up to your imagination. Enjoy this lovely April 20th day—and whatever it is you may be doing.