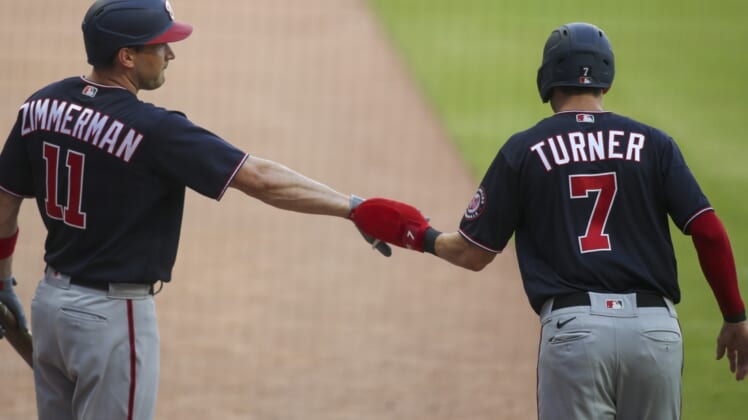 Ryan Zimmerman and Juan Soto each hit home runs to pace a 14-hit attack and help the visiting Washington Nationals break out of their slump and end their five-game losing streak with an 11-6 win over the Atlanta Braves on Tuesday.

But the celebratory mood was dampened by an injury to Washington starter Stephen Strasburg, who left the game with an undisclosed issue after pitching 1 1/3 innings.

Zimmerman’s two-run homer was part of a four-run rally in the fourth inning and Soto’s two-run shot came in the eighth. Washington went on to score its most runs since May 22 when they beat Baltimore 12-9.

Washington took advantage of the wildness of Atlanta starter Max Fried (2-3), who was knocked out after 3 2/3 innings. Fried was charged with five runs on six hits, two walks and seven strikeouts, but was charged with three wild pitches and victimized by two passed balls.

Strasburg had to leave the game after being hit on the heel of his glove on a sharp ground ball struck by William Contreras. But his trouble began in the first inning when manager Dave Martinez and athletic trainer Paul Lessard made a mound visit after Strasburg walked Ronald Acuna Jr. on four pitches to start the game.

He was allowed to remain in the game, but Strasburg never looked comfortable, showed lower velocity and threw mostly curveballs and changeups. Strasburg was examined in the clubhouse between innings, but he was allowed to hit for himself in the top of the second. He walked Abraham Almonte to start the second inning and was injured on the next play.

Acuna was 3-for-4 with a walk, a double, a homer, two RBIs and four runs scored. He has homered in back-to-back games.