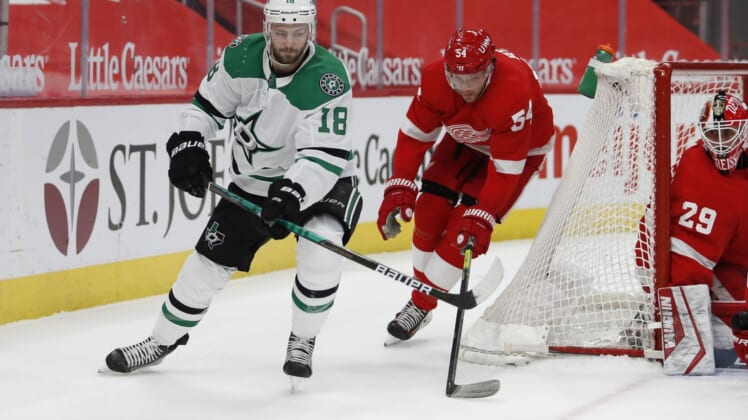 Kero’s goal was his first in the NHL since Nov. 12, 2017, when he played for the Chicago Blackhawks. Andrej Sekera and Ty Dellandrea had the other goals for Dallas. Khudobin made 21 saves in his 11th career shutout.

Dallas avenged a 3-2 loss to the Red Wings on Thursday. Detroit was shut out for the fourth time this season.

The Stars cashed in on one of three power-play opportunities while the Wings only had two power plays.

Thomas Greiss made 30 saves for the Red Wings. Robby Fabbri, who notched his second career hat trick on Thursday, was limited to two shots on goal.

The Stars, who lost four of their previous five games (1-2-2), had a 9-5 advantage in shots on goal in the scoreless first period.

The puck found the back of the Detroit net midway through the second period but the referee ruled that Dallas’ Denis Gurianov kicked it in.

The Stars, who had a 15-7 advantage in shots on goal in the second period, broke through with 2:38 remaining. Jamie Oleksiak made a steal and passed the puck from just outside the blue line to Kero, who got behind the defense. Kero, playing in his 13th game this season, skated to the crease and backhanded a low shot past Greiss.

Dallas made it 2-0 with 11:44 remaining in the final period. Sekera flipped the puck from the point and it fluttered through traffic and eluded Greiss’ right pad. Radek Faksa passed the puck from the boards to Sekera for his second goal this season.

The Stars had a power play later in the period with Vladislav Namestnikov in the penalty box for tripping. Dellandrea tipped in a Roope Hintz shot with 6:17 remaining for his second goal this season. Esa Lindell was credited with the second assist.