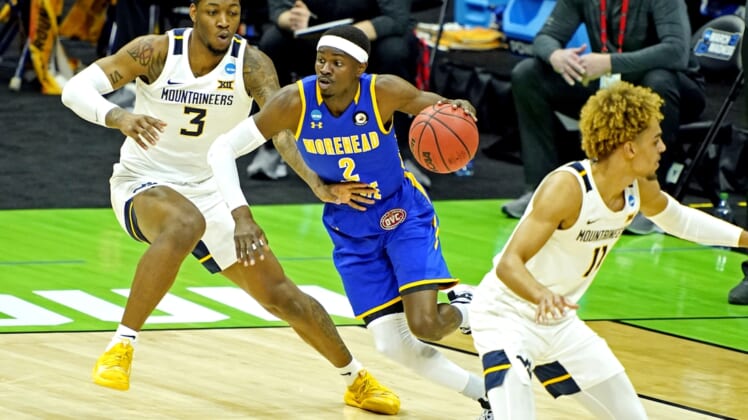 Miles McBride scored 30 points as third-seeded West Virginia pulled away in the second half for an 84-67 victory over No. 14 seed Morehead State in a first-round Midwest Regional game in Lucas Oil Stadium in Indianapolis on Friday.

McBride made 11 of 17 shots while also contributing six rebounds and six assists, with no turnovers. Jalen Bridges added 15 points, Sean McNeil had 13 and Derek Culver overcame a slow start to post 12 points and seven rebounds.

The Mountaineers (19-9) will play 11th-seeded Syracuse in the second round Sunday. Morehead State, which won the Ohio Valley Conference tournament to reach the NCAA Tournament for the first time since 2011, finished at 23-8.

Bridges nailed a 3-pointer to start a key 11-0 run in which McBride scored six points within two seconds.

He scored on a layup, with Cooper committing a flagrant foul that resulted in two free throws and possession. McBride made both attempts from the foul line, and drained another pair after he was fouled soon after getting the inbounds pass.

The Eagles twice got within single digits, but not after McBride’s 3-pointer with 7:50 to go restored West Virginia’s 12-point advantage.

The Mountaineers seemed ready to run away with things early after an 11-0 run gave them a 17-6 lead. Morehead State responded aggressively and put up a matching 11-0 run to tie the game.

The Eagles led 23-22 after Cooper’s 3-pointer, but McBride scored five points in a 7-0 run for the Mountaineers, who surged to a 38-31 lead at halftime.