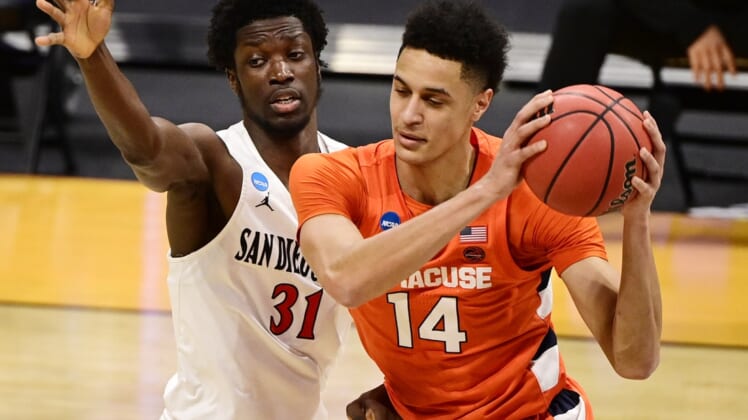 Buddy Boeheim poured in 30 points, Syracuse’s 2-3 zone was dominant, and the 11th-seeded Orange roared past No. 6 San Diego State 78-62 in the opening round of the Midwest Regional in Hinkle Fieldhouse in Indianapolis on Friday.

Boeheim put on a brilliant shooting performance, hitting 11 of 15 from the field, including 7 of 10 from 3-point range. He single-handedly kept Syracuse in the game early, scoring 16 consecutive points for his team, before others chipped in during a 20-0 run that spanned halftime.

Joseph Girard III had 10 of his 12 points during that streak for Syracuse (17-9), which will play either No. 3 West Virginia or No. 14 Morehead State on Sunday.

San Diego State began to do a better job getting inside the Syracuse zone, cutting the lead to 40-29. Boeheim then answered with consecutive 3-pointers to spark an 8-0 run that effectively knocked out the Aztecs. For good measure, Boeheim even hit a 30-footer to beat the shot clock with 6:25 left.

Jordan Schakel and Matt Mitchell, the Mountain West Player of the Year, each scored 17 to lead San Diego State. Mitchell was 1 of 9 from 3-point range.

After Marek Dolezaj scored Syracuse’s first three points, Boeheim scored the team’s next 16, including a four-point play after San Diego State went up 15-10. His pull-up jumper off the dribble gave the Orange a 19-18 lead at the 8:48 mark.

Neither team scored for nearly four minutes until Syracuse’s Robert Braswell hit a corner 3. Girard followed with a trey on the next possession and later converted the Orange’s second four-point play of the half for a 29-18 lead with 2:56 to go.

Girard drilled another 3-ball with 22 seconds left before halftime for a 32-18 lead. The Aztecs missed 12 consecutive shots to end the half.