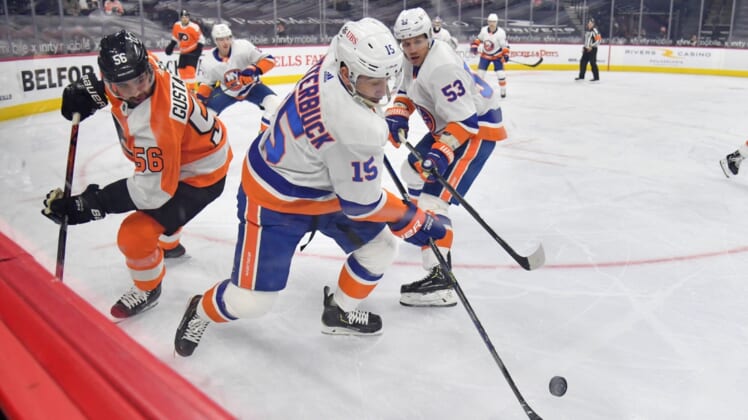 Anthony Beauvillier scored at 3:41 of overtime to lift the visiting New York Islanders past the Philadelphia Flyers 2-1 on Monday.

Beauvillier took advantage of a Philadelphia turnover and scored for the second straight game. Oliver Wahlstrom also scored for the Islanders, who won for the 13th time in their last 16 games (13-2-1).

Oskar Lindblom scored the lone goal for the Flyers, who have dropped three of four (1-2-1). Philadelphia did receive a boost with the return of Sean Couturier, who was a late scratch with a lower-body injury last Saturday.

The Flyers were the more aggressive team early and led 12-4 in shots after a scoreless first period. Sorokin was terrific and made stellar stops late against Travis Konecny and Nolan Patrick.

New York’s Josh Bailey nearly scored short-handed with a backhand on an early Flyers power play in the second, but Elliott moved across the crease to deflect the shot.

Philadelphia’s Justin Braun fired a wrist shot from the point, which clanged off the crossbar with 11:30 remaining in the second.

The Flyers went ahead 1-0 at 12:03 of the second when Lindblom redirected a shot in front and into the net. It was Lindblom’s third goal in the last three games.

Sorokin kept the Islanders within one goal as he made a couple of late saves in the final 30 seconds of the middle period.

The Islanders tied the game at 1 when Wahlstrom scored at 4:06 of the third. The puck came loose after an initial shot, and Wahlstrom tapped it into the net.

The game then tightened defensively on both sides, with few solid scoring chances for either team. The Flyers received a power play with 1:49 left when Nick Leddy was sent off for hooking, but they were unable to capitalize and the contest went into overtime.