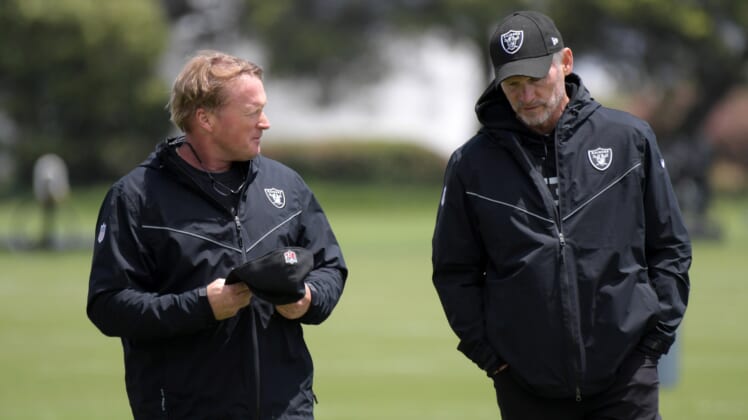 The three-ring circus that is Antonio Brown has swept through the Oakland Raiders organization like a tornado this summer.

It all came to a head (again) on Wednesday as Antonio Brown went after Mayock to the extent that multiple teammates reportedly had to restrain him from physically attacking the general manager. Brown also reportedly uttered a slur in his verbal attack at Mayock.

One day later, there were widespread reports that Oakland was considering a suspension for Brown.

Certainly, that would have been warranted. Not only did he threaten to punch a team executive, but Brown also showed extreme immaturity posting the letter Mayock sent to him about fines levied against him for missing a walkthrough and practice.

In any other profession, this type of behavior could easily get a person fired. Justifiably.

Yet Brown is supremely talented at the game of football. And ultimately, the Raiders opted to sweep all of this under the rug.

This is a huge mistake. Both from the standpoint of establishing real, tangible accountability, and from a financial perspective.

Brown showed the ultimate disrespect to Mayock, and the Raiders organization. He threw a massive, public temper tantrum any toddler would be proud of. And in the end, he’s getting a veritable limp-fingered slap on the wrist.

Now the Raiders are stuck with him.

History tells us things are likely to get worse — not better. Just look at how quickly things spiraled down the drain for Brown in Pittsburgh.

Then, an offseason of relentless social media posts in which Brown went after his teammates, oftentimes exhibiting a level of pettiness you’d expect to see from a hormonal 14-year old young woman who’s angry at her mom.

Finally, Brown was traded to Oakland. In return, the Steelers only got a third- and fifth-round pick for one of the best receivers in the history of the game.

Pittsburgh was so glad to be rid of Brown and his never-ending antics that the team happily absorbed an incredible amount of cash: As part of the bargain, Pittsburgh is carrying a dead cap hit of $21 million this year.

Let that sink in for a moment.

Now, the cycle continues. This time, it’s the Oakland Raiders being swept up in one man’s cyclone of emotional outbursts and childish tantrums.

And rather than take a strong stance against it all, the Raiders opted to continue enabling Brown. That’s not going to fix anything.

On the contrary. It will be utterly surprising if Brown doesn’t end up taking the team further down the rabbit hole in to the realm of utter chaos.