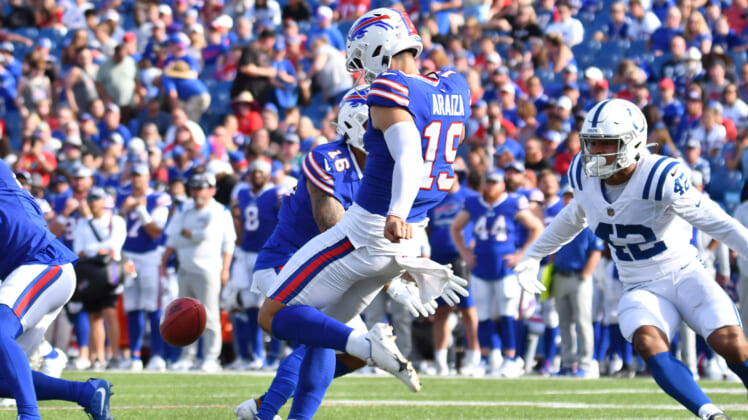 Folks. The hype surrounding Matt Araiza might be real. I know we’re talking about a punter here, but punters are people too.

Typically punters are almost like offensive linemen. They’re not really to be heard from, only seen, on occasion. In all honesty, teams wish they never had to even use their punter.

But when you do have to punt, having one with such a leg like the new Buffalo Bills rookie Matt Araiza has is a treat. As the one who some call the ‘Punt God’, the former San Diego State star finally got a chance to make his NFL debut on Saturday night for the Bills’ first preseason game of the year.

And yes, unfortunately, they had to punt at one point. But it was glorious.

It was Araiza’s only chance to punt on Saturday, but he also got an opportunity to hold for a 46-yard game-winning field goal kick from Tyler Bass. After the game, Araiza was asked about his NFL debut, and all he could talk about was getting a chance to hold, nothing about his legendary boot.

For the record, Araiza’s kick traveled 78 yards in the air but ended up reaching the endzone for a touchback. Still, it net 62 yards. If this were a regular season game, such a drastic field position switch could shift the momentum in a hurry. That has value.

Matt Araiza on his way to winning Bills punting competition

Believe it or not, even though the Bills used a draft pick on Araiza, the 180th selection in April’s draft is in a punting competition with sixth-year pro Matt Haack. He also had an opportunity to punt, connecting on a 38-yard boot, pinning the Indianapolis Colts at their 12-yard line. Both punters did well on Saturday, but Araiza’s tantalizing potential made a lasting impact, and not just in Buffalo.

While Haack may have had the leg up in the competition entering camp, there’s a reason the Bills are looking to improve at the position heading into the season.

Haack finished 32nd in the NFL, averaging just 42.9 yards per punt according to Pro Football Reference in 2021. The Bills have one of the best rosters in football, but one area that held them back a season ago with their special teams. While the Bills also have a great offense, reducing the need for a top punter, Araiza can still help the defense by helping pin their opponent deep in their own territory.

If his first punt was any indication of what’s to come, the Bills may have yet another offseason addition we’ve forgotten all about, and he may end up making a major impact as they aim to get past the Divisional Round in 2022.