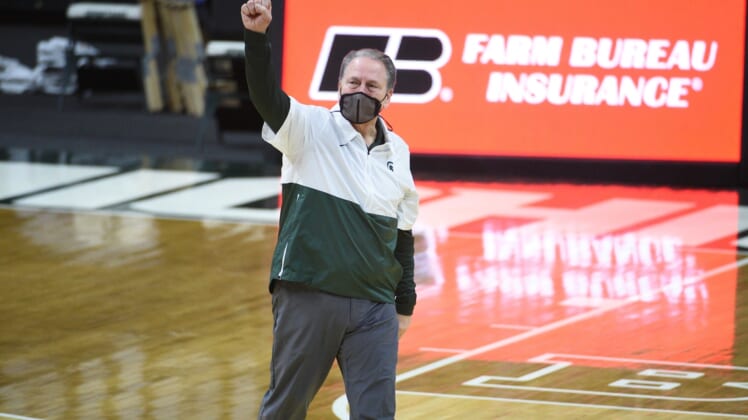 Yes, perennial power Michigan State is in the First Four of the NCAA Tournament.

But considering that a few weeks ago the Spartans’ chances of getting a bid seemed bleak, they simply might be happy to be in the field for the 23rd consecutive time.

They’ll play another traditional power, UCLA (17-9), in an East Regional matchup of No. 11 seeds Thursday night in West Lafayette, Ind.

The teams have 13 national titles between them — UCLA 11 and Michigan State two.

“Yeah, I was a little surprised,” Spartans coach Tom Izzo said of being relegated to the First Four. “(But) it’s a Thursday night game, it’s the biggest game, it’s the only game of two major conferences, and I think it will be good exposure.

“I was just surprised that it was a play-in game. Then again I’m in, and I got the same opportunity as the number one seed, and that’s the way I’m going to look at it.”

Michigan State (15-12) finished below .500 in the Big Ten Conference but has knocked off three top-10 opponents: Illinois, Ohio State and Michigan since the last week of February. The Spartans lost to Maryland in the second round of the conference tournament last week.

The Big Ten had nine members chosen for the tournament, and Izzo said he believes that playing so many games against those teams will serve the Spartans well this week.

“We are battle tested, we’ve been through it all, and I’m proud of them for that,” he said. “I like the way we went. We had our backs against the wall, we had to win, we played all those games with one- or two-day prep anyway, so we are tested on that. We played some of the best teams in the country … so I think we are as prepared as anybody.”

Michigan State is led by forward Aaron Henry, who is averaging 15.3 points, 5.7 rebounds and 3.5 assists a game. He’s the only Spartan averaging double figures in scoring.

The team’s offensive issues are due in large part to the lack of a floor leader. The Spartans have a minus-2.4 turnover margin. They committed 18 turnovers in a 68-57 loss to Maryland on Thursday in the second round of the Big Ten tournament.

UCLA hurt its seeding by losing its last four games, including an 83-79 overtime defeat to Oregon State in the quarterfinals of the Pac-12 tournament.

“I left a great situation (at Cincinnati) to come here and try to build UCLA back into a championship program,” said Cronin, the program’s second-year coach. “This is a step forward for us.”