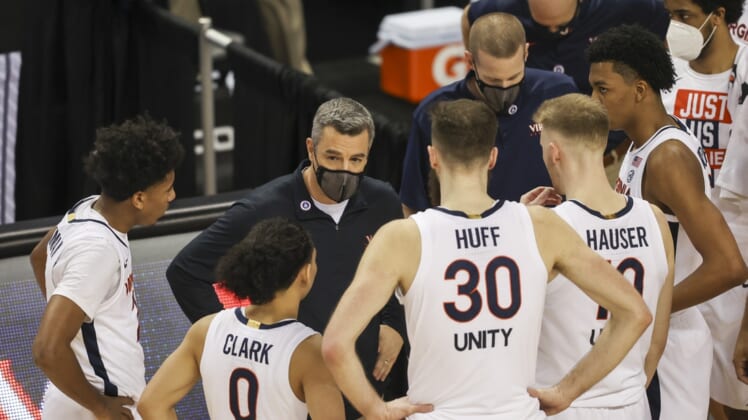 Mar 11, 2021; Greensboro, North Carolina, USA; Virginia Cavaliers head coach Tony Bennett talks to his team during a timeout as his team plays the Syracuse Orange during the second half in the quarterfinal round of the 2021 ACC tournament at Greensboro Coliseum. The Virginia Cavaliers won 72-69. Mandatory Credit: Nell Redmond-USA TODAY Sports

The withdrawal deadline passed for the NCAA basketball tournaments without any schools pulling out, meaning the brackets are locked.

Replacement teams had been on standby for both events as a COVID-19 precaution.

If any team cannot meet the minimum standard of five eligible players available for a game, its opponent will automatically advance to the next round.

The exception is defending champion Virginia, who won the tournament in 2019. The 2020 tourney was not played due to the pandemic.

The Cavaliers, seeded fourth in the West Region, pulled out of last week’s ACC tournament semifinals following a positive COVID-19 test. Most of the Virginia team remains in quarantine in Charlottesville, Va.

Also Wednesday, the NCAA reported there have been seven confirmed positives among 6,900 COVID-19 tests taken so far this week.

“The one-tenth of 1 percent positivity rate is encouraging,” Gavitt said.

Louisville, Colorado State, St. Louis and Mississippi were the potential replacement schools in the men’s field.