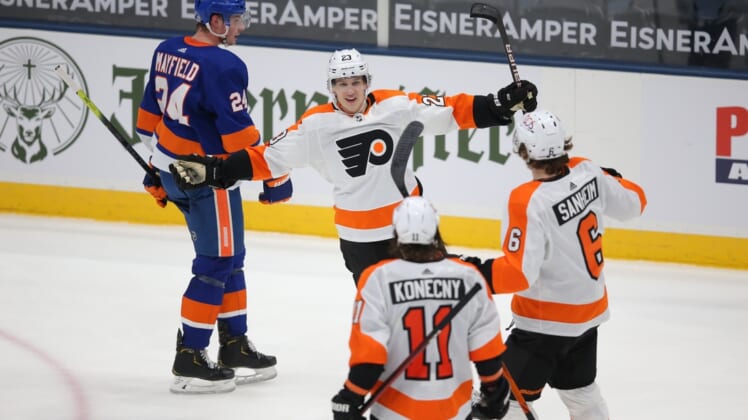 Some 24 hours later, it was New York Islanders head coach Barry Trotz’s turn to be at a loss words following a loss defined by a poor middle period.

The Islanders will look to snap a rare losing streak Saturday night, when they play host the Flyers at Uniondale, N.Y., in the second of three consecutive games between the longtime division rivals.

Both teams were off Friday after an eventful series opener Thursday night, when the visiting Flyers scored three second-period goals and the Islanders responded with three unanswered third-period goals. Oskar Lindblom scored with 2:22 remaining to give Philadelphia a 4-3 win.

Lindblom’s second goal of the game spared the Flyers what could have been a second straight difficult defeat. Philadelphia gave up seven second-period goals Wednesday, the most in franchise history for a single period, in a 9-0 loss to the New York Rangers.

After the lopsided defeat, Vigneault said his team “… got totally embarrassed.” He wasn’t much happier when speaking prior to Thursday’s game.

“I believe we’re having some consistency issues in our game,” Vigneault said. “Some of our players are going from a Grade-A performance to a C performance. In this league, that’s just not good enough. You can’t always be at your top with the demands of every individual game in the schedule, but you can’t have the drop offs that we are having as a team right now.”

Now it’s Trotz who is looking for answers and seeking a more consistent effort from his team.

The Islanders had moved into first place in the East Division during a nine-game winning streak and 12-game point streak that was snapped in a 3-1 loss to the Washington Capitals on Tuesday night. Then they gave up the three goals to the Flyers on Thursday in less than 12 minutes of the second period, when they were outshot 12-5.

The Islanders scored their three third-period goals in fewer than seven minutes, but their chances to escape with a point, or the victory, evaporated when the Flyers’ Claude Giroux won a faceoff against Mathew Barzal deep in the New York zone. Lindblom, open in the slot, fired a shot past goalie Semyon Varlamov, who was screened by Giroux.

“I’m not going to have any excuses — I’m disappointed,” Trotz said. “I’m disappointed in our push in the second and just our thought process of how we played that game. Not enough detail. We knew (they were) going to have to play with some weight against this team that’s going to be very determined. I thought we played very light.

“It wasn’t a good enough effort. I like the fact that we came back (but) then we shoot ourselves in the foot last couple minutes of the game.”