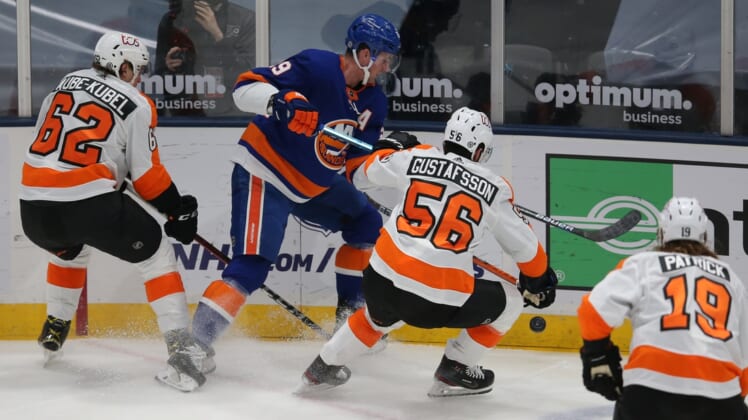 Oskar Lindblom’s second goal of the game snapped a tie with 2:22 left in the third period Thursday night for the visiting Philadelphia Flyers, who squandered a three-goal, third-period lead before bouncing back from a historic defeat by edging the New York Islanders 4-3 in Uniondale, N.Y.

The Flyers, playing fewer than 24 hours after giving up seven second-period goals in a 9-0 loss to the New York Rangers, took a 3-0 lead in the second period Thursday thanks to goals by Lindblom, Claude Giroux and Jakub Voracek in a span of just under 12 minutes.

But Michael Dal Colle, Sebastian Aho and Oliver Wahlstrom scored within a span of fewer than seven minutes in the third period for the Islanders before the Flyers won a faceoff deep in the New York zone to set up the winning goal by Lindblom. The left winger fired a shot past Semyon Varlamov, who was screened by Giroux.

The goal in the first period was the first since Jan. 15 for Lindblom (a span of 21 straight games), whose two-goal game was his first since Feb. 17, 2019 — about 10 months before he was diagnosed with Ewing’s sarcoma.

Varlamov recorded 27 saves for the Islanders, who have lost two straight following a nine-game winning streak.

After a scoreless first, Lindblom opened the scoring by putting back the rebound of Giroux’s shot at the 2:26 mark of the second. Giroux redirected a shot by Nate Prosser with 9:56 left and Voracek capped a 3-on-2 rush by scoring with 5:59 remaining.

Nick Leddy assisted on all three Islanders goals in the third.

New York began coming back at the 7:53 mark, when Dal Colle took a pass from Leddy and scored from the left faceoff circle. Leddy skated through traffic and fed Aho with 6:07 left before Leddy collected a puck off the boards and dished to a wide-open Wahlstrom, who scored as he bore in on Hart from the left crease.