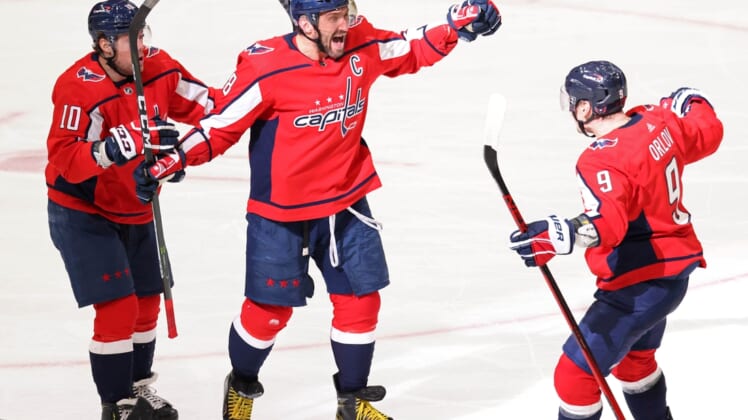 As the goals keep coming for Alex Ovechkin, so do the wins for the Washington Capitals.

Ovechkin will attempt to run his goal-scoring streak to six games and the red-hot Capitals will try to extend their season-high winning streak to eight games Saturday night when they host the New York Rangers.

Ovechkin scored his 719th and 720th career goals in the final 6:42 on Friday night when Washington shook off a lackluster effort to beat the Rangers 2-1. Before Ovechkin’s first tally, the Capitals mustered 12 shots on goal, and they finished with just 18 shots on goal.

Ovechkin passed Phil Esposito on Tuesday for sixth place on the all-time goal-scoring list, and he is 11 goals from tying Marcel Dionne for fifth. During his scoring streak, he has six of his 14 goals this season.

On Friday, Ovechkin scored his latest goals after being leveled by New York defenseman Ryan Lindgren during the second period on a hit that broke his stick in half. He kept his scoring streak intact with a pair of rebound goals.

“Sometimes you have to get those really gritty ones,” Ovechkin said. “It’s still the same whether it’s a goal from my spot or whatever. It’s a most important goal, and I’ll take it.”

Washington defenseman Justin Schultz said, “He has a great determination to get to the front of the net and get the puck in.”

The Capitals have three one-goal wins during their streak, and Ovechkin has tallied seven times in the seven games. Ovechkin also has scored nine times in his past 14 games, a stretch in which Washington is 12-1-1 since a 4-1 home loss to the Rangers on Feb. 20.

When Ovechkin takes the ice Saturday and attempts to continue his roll, the Capitals will get winger Tom Wilson back from a seven-game suspension for his hit on Boston Bruins defenseman Brandon Carlo on March 5. Wilson totaled seven goals and 10 assists in 21 games before the suspension, and the Capitals are looking forward to his return.

“He brings so much to our team — just his energy, to have him in the room and on the bench with his size and his game and his physicality,” Capitals coach Peter Laviolette said. “We’re certainly going to be happy to see him back.”

The Rangers are 2-4-1 in their past seven games since winning three straight March 2-6. After a 9-0 romp over the Philadelphia Flyers on Wednesday night, New York was held to one goal or none for the seventh time.

For the third straight game, the Rangers will be coached by Kris Knoblauch, who is the coach of their AHL affiliate, the Hartford Wolf Pack. Knoblauch is filling in for David Quinn, who is unavailable because he is in the NHL’s COVID-19 protocol.

The interim coach will again attempt to find a way to slow Ovechkin.

Artemi Panarin scored New York’s lone goal on Friday during a power play. Since returning from a three-week absence due to personal reasons, he has three goals and four assists in a four-game points streak.

“It’s tough to stomach because we felt like we played pretty well,” New York’s Chris Kreider said of the loss in which the Rangers matched a season low for shots allowed. “We played a really good road game. They jumped on two big opportunities in the third, it was close throughout. We were able to limit chances from a very good offensive team.”