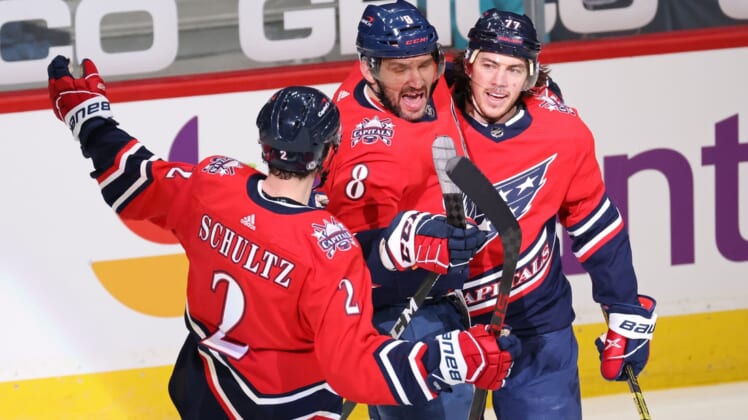 Alex Ovechkin hit two more milestones Tuesday night, when the star left winger assisted on the Capitals’ first goal and scored the second one in Washington’s 3-1 win over the visiting New York Islanders.

Ovechkin’s 718th career goal broke a tie with Phil Esposito for sixth on the all-time list, and the assist gave him 1,300 career points.

T.J. Oshie and Nicklas Backstrom also scored as Washington won its sixth straight and moved into a tie for first in the East Division with the Islanders, who had their nine-game winning streak snapped.

Nazem Kadri recorded two goals and two assists as Colorado rallied to beat Anaheim in Denver. Mikko Rantanen, Andre Burakovsky, Brandon Saad and Samuel Girard had a goal and an assist each for the Avalanche, who earned their fourth consecutive win and matched their highest goal total of the season.

Adam Henrique had a goal and two assists, Troy Terry had a goal and an assist, Danton Heinen and Derek Grant had a goal each and Ryan Miller stopped 28 shots for the Ducks. Anaheim took its fourth loss in a row and its 13th defeat in 15 games (2-10-3).

Brayden Point notched the game-deciding tally in a shootout to go along with a goal and an assist in regulation as Tampa Bay rebounded to beat host Dallas.

Dallas’ Jason Robertson and Tampa Bay’s Ross Colton scored earlier in the shootout. Down 3-1 with a little over two minutes remaining in regulation, the Stars got goals 41 seconds apart from Jamie Benn and Alexander Radulov to tie the game. Miro Heiskanen also scored for Dallas, and Jake Oettinger made 33 saves.

Kaapo Kahkonen stopped 31 shots while garnering his ninth consecutive win and second career shutout as Minnesota completed a sweep of its three-game series with Arizona in Saint Paul, Minn.

Ryan Hartman, Mats Zuccarello and Jared Spurgeon scored goals for the Wild, who tied a franchise record with their eighth straight home victory, the longest home win streak in the NHL this season. Minnesota improved to an NHL-best 12-2-1 since Feb. 18.

Miles Wood deflected in a shot for his tiebreaking goal early in the third period as New Jersey snapped an 11-game home losing streak by extending Buffalo’s overall skid to 12 in a row at Newark, N.J.

With the Devils on the power play, Wood stood untouched in front of the net and redirected home Jesper Bratt’s shot past Sabres goaltender Jonas Johansson (24 saves) to break a 2-2 tie 4:52 into the final period. Yegor Sharangovich and Sami Vatanen also scored and Mackenzie Blackwood made 33 stops for New Jersey.

Tobias Rieder and Jeff Skinner scored second-period goals for reeling Buffalo, which is 0-10-2 since Feb. 23.

With the game tied at 1 since late in the first period, Frederic, just off the bench, made use of a screen by teammate David Pastrnak and from the high slot beat Pittsburgh goaltender Casey DeSmith (31 saves) glove side at 7:07 of the third.