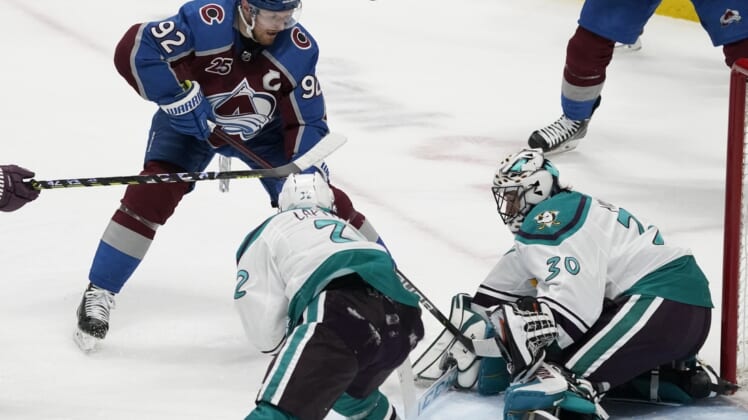 Nazem Kadri recorded two goals and two assists as the Colorado Avalanche rallied to beat the Anaheim Ducks 8-4 in Denver on Tuesday night.

Mikko Rantanen, Andre Burakovsky, Brandon Saad and Samuel Girard had a goal and an assist each for the Avalanche, who earned their fourth consecutive win and matched their highest goal total of the season.

Adam Henrique had a goal and two assists, Troy Terry had a goal and an assist, Danton Heinen and Derek Grant had a goal each and Ryan Miller stopped 28 shots for the Ducks. Anaheim took its fourth loss in a row and its 13th defeat in 15 games (2-10-3).

The game was tied at 4 after two periods, but the Avalanche scored twice in the first four minutes of the third. MacKinnon’s power-play blast made it 5-4 at 1:01, his eighth of the season, and Girard shot one in off Anaheim defenseman Josh Mahura at 3:24.

Bellemare scored an empty-net goal and Saad tallied on the power play in the final four minutes.

Kadri tied it again at 7:02 of the opening period, but the Ducks went back in front on Henrique’s one-timer at 15:59.

Colorado got a power play late in the first, but Grant was tripped by Gabriel Landeskog on a breakaway to give Anaheim a penalty shot. Grant beat Miska in the one-on-one showdown at 19:42 for his first goal of the season.

Grubauer replaced Miska to start the second and the Avalanche tied it up. Rantanan’s backhander went off Miller’s shoulder and in at 11:25, his 14th of the season, and then Kadri tipped in a shot by Burakovsky at 18:26 to make it 4-4.