Vincent Frank
Jun 13, 2021; Denver, Colorado, USA; A Phoenix Suns fan before the game against the Denver Nuggets in game four in the second round of the 2021 NBA Playoffs at Ball Arena. Mandatory Credit: Isaiah J. Downing-USA TODAY Sports

Phoenix Suns fans have made some headlines thus far during the NBA Playoffs. Primarily, “Suns in four” guy Nick McKellar has become something of a local legend after getting in a fight with a Denver Nuggets fan during the Western Conference Semifinals series.

Taking on the Los Angeles Clippers at home in the Western Conference Finals Sunday afternoon, the Suns came out on top to earn the Game 1 win.

Apparently, some of the bad blood we saw during the game spilled over to the fan section at Phoenix Suns Arena after the game. Check out Suns and Clippers fans getting into a major brawl as they were exiting the arena.

As we saw in the spat between Mr. McKellar and the Nuggets fan mentioned above, it looks like Suns fans did not initiate the fight. Even then, the raucous that broke out between the two sides can’t be seen as a good thing.

We’ve already seen fans get banned from games during the playoffs following ugly situations involving players. A Philadelphia 76ers fan throwing popcorn on Washington Wizards guard Russell Westbrook is an example of this. Meanwhile, the Knicks banned a fan who seemingly spit in the direction of Atlanta Hawks guard Trae Young during their first-round game at Madison Square Garden. 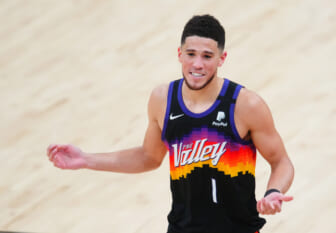 Let’s just hope these situations don’t repeat themselves with the conference finals getting going around the NBA. Yes, that includes Phoenix Suns fans.