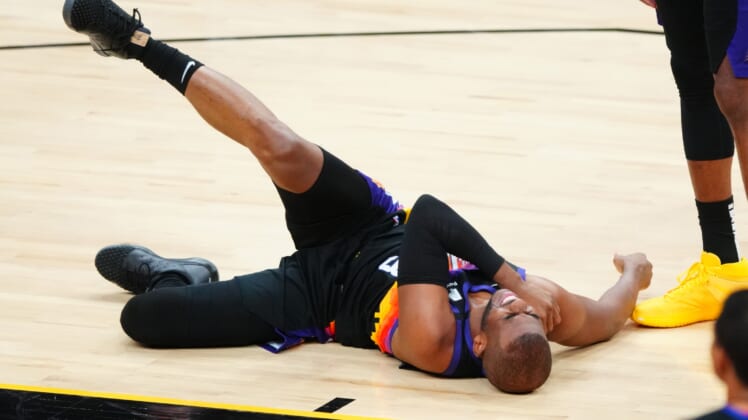 May 23, 2021; Phoenix, Arizona, USA; Phoenix Suns guard Chris Paul reacts after suffering an injury against the Los Angeles Lakers in the first half during game one in the first round of the 2021 NBA Playoffs. at Phoenix Suns Arena. Mandatory Credit: Mark J. Rebilas-USA TODAY Sports

Phoenix Suns star guard Chris Paul has been dealing with a shoulder injury for pretty much their entire first-round series against the Los Angeles Lakers.

The hope heading into Tuesday night’s Game 5 matchup was that Paul might be getting closer to 100%. With his Suns leading by a resounding 33 points midway through the third quarter, the future Hall of Fame point guard appeared to have reinjured his shoulder.

It came as Chris Paul was going for a rebound against Lakers wing Wesley Matthews.

As you can see, Paul was in a tremendous amount of pain on the hardwood in Phoenix before he ultimately made it back to the Suns’ bench.

In a display of just how tough the star guard is, Paul returned to shoot two free throws before exiting the game for the locker room.

Even before this latest episode, it was pretty clear Paul isn’t at 100%. He had scored just seven points on 3-of-7 shooting prior to those two aforementioned free throws.

Despite this, Phoenix opened up a huge halftime lead. The hope here is that Paul’s injury is not as severe as it looks with the Suns about to go up 3-2 in the best-of-seven series.