Anthony Davis recorded consecutive 34-point performances to give the Los Angeles Lakers a brief advantage in their Western Conference first-round series against the Phoenix Suns.

A knee injury, however, put his availability in doubt for Sunday’s Game 4. He played, but now a strained left groin has him very much in question for Tuesday’s Game 5 in Phoenix.

Davis collapsed to the floor following a drive to the basket late in the second quarter of Los Angeles’ 100-92 loss to the Suns on Sunday. The defeat evened the series at two wins apiece. 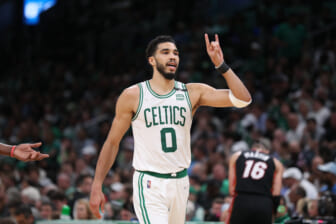 “You know, he’s one of the best players in the world, so you have to adjust,” Lakers coach Frank Vogel said of the loss of the eight-time All-Star. “And I thought we gave great effort trying to overcome that loss, but it certainly wasn’t enough.”

LeBron James recorded 25 points, 12 rebounds and six assists in a losing effort. The four-time NBA Most Valuable Player likely will be asked to shoulder more of the load should Davis be unable to play.

“For me, it’s putting our team in position to be successful,” James said. “It starts with my approach, my accountability, trickles down to everybody else. So, you know, these shoulders are built for a reason. If it takes for me to put some more on top of it, then so be it. Win, lose or draw, I’m ready for the challenge.”

Kyle Kuzma likely would receive more playing time should Davis be unable to play. The 25-year-old started the second half in place of Davis and finished with 11 points on Sunday. 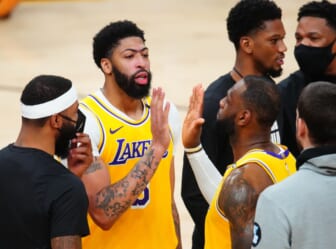 Kentavious Caldwell-Pope could draw back into the lineup on Tuesday after sitting out Game 4 with a left quad contusion.

While the defending champions were clearly hobbled on Sunday, the second-seeded Suns received a boost from Chris Paul. The veteran played his best game since injuring his shoulder in the opener and recorded 18 points, nine assists and zero turnovers in 32 minutes.

That’s quite a performance considering coach Monty Williams initially planned to sit Paul for the game.

Jae Crowder stepped up by scoring 17 points, however his three 3-pointers were a talking point after the contest. After all, he was 2 for 20 from beyond the arc in the previous three games.

“I’ve been here before,” Crowder said. “I’ve been in slumps before and I just stay even keel.”

Deandre Ayton recorded his fourth straight double-double of the series on Sunday after collecting 14 points and 17 rebounds. The former No. 1 overall pick is averaging 19.8 and 13.5, respectively, in the series.