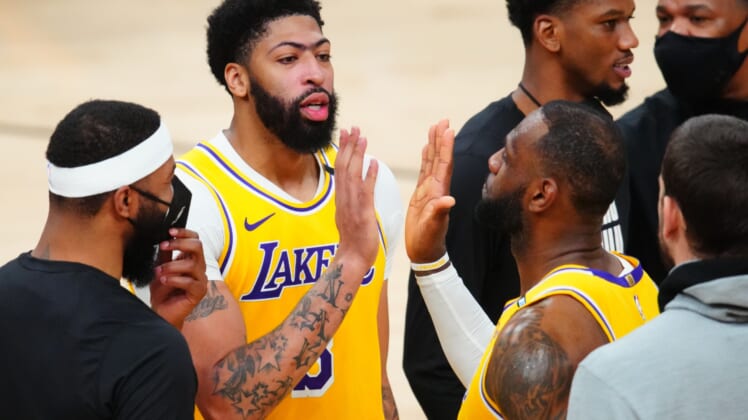 May 25, 2021; Phoenix, Arizona, USA; Los Angeles Lakers forward Anthony Davis (left) celebrates with LeBron James against the Phoenix Suns during the second half in game two of the first round of the 2021 NBA Playoffs at Phoenix Suns Arena. Mandatory Credit: Mark J. Rebilas-USA TODAY Sports

The Los Angeles Lakers received an update Monday on Anthony Davis injury and the news isn’t promising for Game 5 against the Phoenix Suns.

Davis exited Sunday’s Game 4 loss to the Suns in the first half, grabbing at his groin and not returning for the second half. Los Angeles quickly ruled him out and listed him as day-to-day a short time later. While it’s a promising designation for his long-term health, the news isn’t all good for Los Angeles.

According to The Athletic’s Shams Charania, Davis is unlikely to play in Game 5 due to the groin injury. With the short turnaround for Tuesday night’s game, the oft-injured star doesn’t have enough time to rest and recover to the point the organization would feel safe playing him.

The Lakers held a 2-1 series lead entering Sunday night and there was optimism about taking the series, even as they trailed 54-50 at halftime of Game 4. But with Davis sidelined, Phoenix outscored Los Angeles 27-15 in the third quarter to put the game away.

With the series tied at two games apiece, the Lakers will likely take the court at the Phoenix Suns Arena with a significant disadvantage.

The Lakers are used to Davis being sidelined by an injury. During the 2020-’21 regular season, per Statmuse, Los Angeles went 11-7 in games without the All-Star forward. But Game 5 is a vastly different moment to play without one of the NBA’s best players.

With Davis sidelined, Los Angeles needs LeBron James to play at an MVP-caliber level. But ankle injuries have significantly limited his explosiveness and his ability to drive to the rim with the same power. Even more concerning for the Lakers, none of James’ teammates are stepping up.

Dennis Schroder, who needs to increase his value before free agency, shot 3-of-13 from the field in Game 4 and Kyle Kuzma (4-of-11) didn’t fare much better. While the Lakers do have Andre Drummond, he has been an alarming defensive liability since arriving in Los Angeles and is a very flawed player offensively.

Phoenix is dealing with its own injury to a star, but Chris Paul fought through a troubling issue with his shoulder and led the Suns to a victory. Thanks to the Anthony Davis injury, we should see the Suns turn to Deandre Ayton even more in this series.

Ayton is averaging 19.8 points and 13.5 rebounds through four games against Los Angeles, shooting 81% from the field. With his defensive assignments even easier for Game 5, the 22-year-old could put on another impressive performance to help take a 3-2 series lead.