Former Detroit Lions running back Kerryon Johnson didn’t stay on the open market long, getting claimed off waivers by the Philadelphia Eagles on Friday, the team announced.

Johnson was waived by the Lions on Thursday. The former second-round pick in 2018 from Auburn was seemingly expendable with Detroit selecting D’Andre Swift last year at No. 35 overall, picking up Jamaal Williams earlier this offseason and drafting Jermar Jefferson late in this year’s draft.

Johnson may not get much of an opportunity in Philadelphia with a backfield that sports Miles Sanders, rookie Kenny Gainwell, Jordan Howard and Boston Scott. As was the case last season, Sanders will likely be the lead running back with the rest vying for time behind him.

Gainwell was taken in the fifth round last week, but is seen as a back that may be a solid NFL runner and pass-catcher.

Johnson had a solid rookie season in 2018, gaining 641 yards, but he played in only 10 games due to a knee injury. Another injury limited him to eight games in 2019 and he saw little playing time behind veteran Adrian Peterson and Swift in 2020, getting just 71 touches all season, 52 carries and 19 receptions.

Johnson, 23, ran for 1,225 yards on 283 carries and eight touchdowns in his three seasons with Detroit, averaging 4.3 yards per carry. He had 61 receptions for 527 yards and three scores, averaging 8.6 yards a catch. 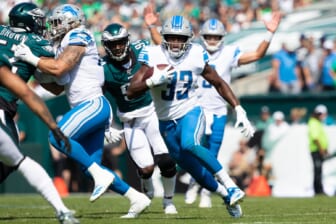