[brid autoplay=”true” video=”777883″ player=”23231″ title=”5%20NFL%20players%20set%20to%20take%20that%20next%20step%20as%20sophomores%20in%202021″ duration=”123″ description=”The 2021 NFL Draft class has been the talk of the gridiron world recently. Even then, there’s a ton of young players from last year’s iteration set to take that next step as sophomores.Chase Young was great for his Washington Football Team as a rookie. However, the expectation is that the former No. 2 pick will enter the NFL Defensive Player of the Year conversation under Ron Rivera in the nation’s capital this coming season.On the offensive side of the ball, Philadelphia Eagles quarterback Jalen Hurts has been given the keys to the kingdom and has a shiny new toy. Could he excel as a sophomore?Below, we take a look at five second-year NFL players who will take that next step once the 2021 season comes calling in September.” uploaddate=”2021-05-06″ thumbnailurl=”//cdn.brid.tv/live/partners/17660/thumb/777883_t_1620326394.png” contentUrl=”//cdn.brid.tv/live/partners/17660/sd/777883.mp4″]

The Philadelphia Eagles continued building an impressive backfield by claiming Kerryon Johnson off waivers, the team announced on Friday.

Johnson was a second-round pick back in 2018 and spent his previous seasons with the Detroit Lions. After the team drafted D’Andre Swift in Round 2 last year, it seemed Johnson’s time in Detroit was close to an end.

Knee injuries plagued the former Auburn star during his time with the Lions, but Johnson’s talent is obvious, and he did appear in all 16 games in 2020. The Eagles are no doubt happy to have a lightly-used, 23-year-old back to provide more depth to their rushing attack.

Philadelphia had one of the more impressive 2021 NFL Draft classes, but what should the team prioritize next as it seeks to improve the roster? Here are three potential moves for the Eagles to consider. 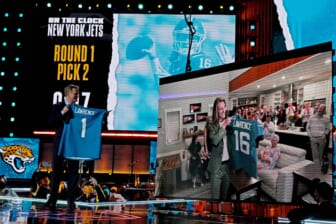 Relying on a rookie in pass protection isn’t always a great idea, especially since Gainwell was a fifth-round pick and last played at Memphis in 2019. Scott is extremely undersized, Howard is a bubble roster player, and someone needs to spell Sanders.

That’s where Johnson comes in. He got lost in the shuffle with the Lions when they gave veteran Adrian Peterson more touches and increased Swift’s role, but he provides Philadelphia with what it needs.

For one, Johnson is thickly built at 5-foot-11 and 211 pounds, and is known for his ability as a pass protector and hard-nosed running style.

Johnson can also catch the ball well out of the backfield, evident in his total of 32 receptions as a rookie. He can not only help Gainwell adjust to the NFL, but also serve as a legitimate secondary threat to Sanders, who’s a capable pass-catcher in his own right.

Most importantly, the players returning from injuries on the offensive line and the addition of a back like Johnson gives Hurts far superior pass protection than what he had in 2020. Plus, Johnson is yet another weapon Hurts can throw to for easy completions and count on to get tough yardage between the tackles.

Given the dubious depth in the Eagles’ receiving corps and the big roles they’re asking their past two first-round picks to play in Jalen Reagor and reigning Heisman Trophy winner DeVonta Smith, anyone who can take the burden off them will be a big help.

That’s what Johnson should do for Philly. The question is whether he can shake off his knee injuries and play like he did to kick off his NFL career, when he averaged 5.4 yards per carry and ran for 641 yards in 10 games during the 2018 campaign. Over the last two years, Johnson’s YPC has dipped to 3.6.

As training camp unfolds, the Eagles are about to find out what they have. Chances are, Johnson will get back on track and prove to be an underrated addition as Sanders’ primary backup. After all, Philadelphia didn’t let him clear waivers before acquiring him, which bodes well for Johnson’s outlook.