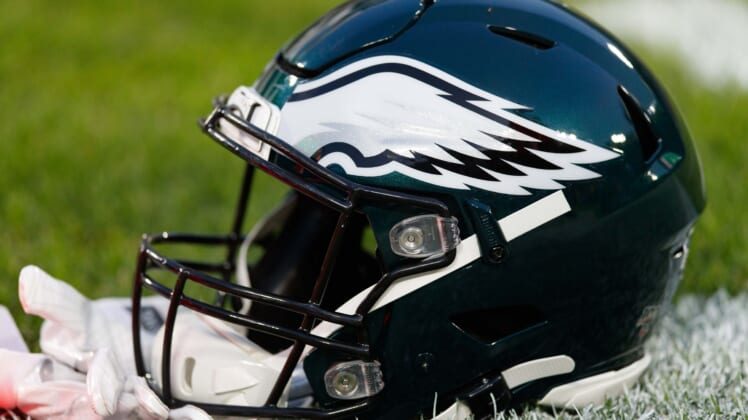 Sep 26, 2019; Green Bay, WI, USA; A Philadelphia Eagles helmet sits on the field during warmups prior to the game against the Green Bay Packers at Lambeau Field. Mandatory Credit: Jeff Hanisch-USA TODAY Sports

The 2020 NFL trade deadline is quickly approaching. It’s now almost two weeks away as teams around the league look to solidify their standing heading into the midway point of the season. That now apparently includes the struggling Philadelphia Eagles.

“The Eagles have had a slow start and been ravaged by injuries to certain position groups but remain very much alive in a brutal NFC East and are aggressively approaching the trade deadline, league sources said, Jason La Canfora of CBS Sports reported Sunday. General manager Howie Roseman is among the more proactive executives in the league and has already sent signals to multiple teams that he is interested in acquiring some of their talent if they are open to it.”

Philadelphia entered Week 6’s contest against the Baltimore Ravens boasting an awful 1-3-1 record. The Eagles’ only win came against an injury-plagued 49ers squad back in Week 4. Outside of that, it has been an unmitigated disaster for Doug Pederson’s squad.

Getting reinforcements into the mix ahead of the Nov. 3 NFL trade deadline could help Philadelphia make a run in a horrible NFC East moving forward. After all, the Eagles entered Sunday’s NFL action tied with the Dallas Cowboys in the loss column in the division.

Philadelphia Eagles rumors: Who could the team trade for?

Leading up to the NFL trade deadline, there’s a ton of needs in Philadelphia. That includes the offensive line, wide receiver and cornerback. Primarily, the Eagles need to find a way to get struggling quarterback Carson Wentz more weapons at wide receiver.

The likes of Marvin Jones (Lions), A.J. Green (Bengals) and Jamison Crowder (Jets) could make some sense if they were to be put on the trade block. We focused on Green as an option given his struggles with the Bengals through five weeks. However, the finances might be an issue for the Eagles here.

It was reported earlier in the season that the Eagles might look to deal some veterans ahead of the NFL trade deadline. Names bandied about included wide receiver Alshon Jeffery and Pro Bowl defensive lineman Fletcher Cox. Obviously, that no longer appears to be the case.

Expect it to be a busy couple weeks in Philadelphia heading into the NFL trade deadline. That’s for sure.