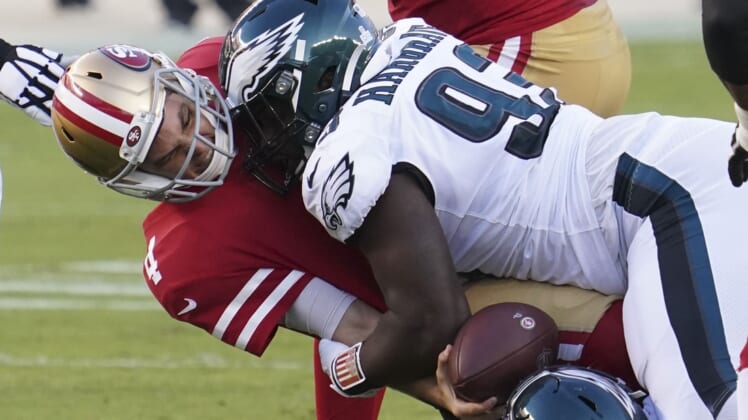 However, it became apparent from the opening snap that Philadelphia was not about to let its 0-2-1 record drag the team down at Levi’s Stadium. Carson Wentz stepped up when it was needed the most. Philadelphia’s defensive line came to play big time.

On the other end, Nick Mullens put up a brutal performance for the injured Jimmy Garoppolo. He turned the ball over three times, pretty much giving the game away in the process.

In the end, Philadelphia came away with a hard-fought 25-20 victory to claim its first win of the season. Meanwhile, the 49ers fell to a 2-2. Here are the biggest winners and losers from this NFL Week 4 “Sunday Night Football” matchup.

The San Francisco 49ers were waiting for this moment. Getting both Kittle and Deebo Samuel on the field together for the first time since Super Bowl LIV. While Samuel did not have much of an impact in his 2020 debut, Kittle was out there dominating Philadelphia’s defense.

The recently-extended All-Pro tight end caught all 15 of his targets for 183 yards with a touchdown. He did so catching passes from struggling backup quarterback Nick Mullens and C.J. Beathard. Given the 49ers’ injury issues thus far on the season, seeing Kittle back to his dominating self is going to be huge for Kyle Shanahan and Co. moving forward.

Philadelphia has also seen myriad injuries on the offensive side of the ball this season. The team was without its two starting receivers in that of DeSean Jackson and Alshon Jeffery Sunday evening. It was also missing three-fifths of its starting offensive line. It showed big time.

Facing a 49ers defensive line without Pro Bowl edge rushers Nick Bosa and Dee Ford, the Eagles struggled protecting Carson Wentz. While the quarterback was able to break contain with some nifty runs, he was under pressure throughout the evening. That included the struggling signal caller being hit 10 times. This is an area the Eagles must fix if they are to rebound from this early-season rut. Unfortunately, they are running out of healthy bodies.

After throwing six interceptions in the first three games of the season, Wentz’s outing Sunday night against the 49ers did not start out swimmingly. He was picked off in the first quarter on a batted ball. However, the struggling quarterback was tough as nails behind a makeshift offensive line throughout the remainder of the evening.

It culminated in a 42-yard go-ahead touchdown to Lions and Packers castoff Travis Fulgham in the fourth quarter to send Philadelphia to its first win of the season. Despite being hit 10 times and running for his life throughout the game, Wentz showed up when the Eagles needed it the most. That’s the first time we’ve seen this all season.

It was just last week that Mullens put up 343 yards in a blowout 36-9 win over the New York Giants. It’s the first time San Francisco went without a punt since 1993. Mullens also joined Joe Montana, circa 1985, as the only 49ers quarterback to throw for 220-plus yards in nine consecutive starts. Much to the chagrin of the 49ers’ brass, that led to some talk about a quarterback controversy between Mullens and Jimmy Garoppolo.

We can now throw that out the window after what Mullens did Sunday against Philadelphia. He turned the ball over three times, including throwing two of the worst interceptions you’ll ever see on an NFL field.

Throwing it off your back foot and into double coverage. That’s never a good idea.

Honestly, it’s hard to understand what Mullens was doing here. This pick-six gave Philadelphia a two-score lead. It also led to Mullens being benched in favor of C.J. Beathard, who would lead the 49ers on a touchdown-scoring drive and actually have a shot in the end zone on the final play for the win. In reality, Mullens is the primary reason San Francisco is now 2-2 on the season.

It’s not too often that you see future Hall of Fame 49ers left tackle Trent Williams embarrassed throughout the entirety of a game. That’s exactly what we saw from him Sunday evening against Philadelphia. Whether it was Mullens or Beathard under center, San Francisco’s offensive line did not give the quarterback any time to pass the ball.

The two signal callers were hit a combined 15 times and sacked five times throughout the game. Lesser known Eagles defensive linemen such as Derek Barnett, Genard Avery and Josh Sweat were among those who stood out the most. It tells us a lot about Philadelphia’s depth along this unit. It could also help the Eagles overcome shortcomings elsewhere on defense. Sunday night was a prime example of this.

On the other end of the spectrum, San Francisco’s offensive line was just brutal for pretty much the fourth consecutive game to open the season. Those following this team know very well that the interior of the offensive line has struggled big time. It led to 49ers quarterbacks being sacked a combined eight times over the first three games.

Unfortunately for Kyle Shanahan and Co., it was the offensive tackles that decided to struggle in pass protection. Trent Williams might have played his worst game as a professional. Right tackle Mike McGlinchey struggled on the other side. It led to 49ers quarterbacks being hit a whopping 15 times. If this unit doesn’t fix things in a quick manner, Jimmy Garoppolo’s injury issues from earlier in the season will be the least of San Francisco’s worries.