In a new countersuit to LIV Golf’s recent anti-trust court filing, the PGA has boldly claimed that the existence of the new golf tour is so that the Saudi Arabian government can sports wash its recent human rights atrocities.

The war between the PGA and LIV Golf has aged on for months and hit a peak when the legendary golf tour indefinitely suspended all of its members that had joined the roster for their new rivals. In response to the ban, LIV and a close to a dozen players filed an anti-trust lawsuit against the PGA claiming that they illegally suspended athletes for joining LIV and were using its monopoly power to crush the competition. Well, the Tour has fired back with a suit of their own and the response was very strong.

In a countersuit filed on Wednesday, and obtained by ESPN, the PGA slammed LIV for only being in existence so that the Saudi Arabian government — which financially backs the new tour — can “sports wash” away the long-lasting stigma of recent atrocities by top officials in their monarchy. The country’s government has a long history of human rights violations and was linked to the murder of journalist Jamal Khashoggi in 2018.

Attorneys for the PGA claimed in the filing that the Saudi government used “astronomical sums of money to induce [players] to breach their contracts with the Tour in an effort to use the LIV Players and the game of golf to sports wash the recent history of Saudi atrocities and to further the Saudi Public Investment Fund’s Vision 2030 initiatives.”

The countersuit’s primary goal is to prove that LIV Golf used the massive cash flow it has from the Saudi government to make players breach their PGA contracts, and that is why the Tour banned those athletes after they attempted to double dip in both golf circuits. The filing also included a text exchange between LIV CEO Greg Norman and former PGA star Sergio Garcia, as the golf great tried to call the Tour’s bluff on possible suspensions for players competing for LIV.

Earlier in the week, PGA great Phil Mickelson and three other players asked the court to be removed from the suit. That brings the total to seven for players that were once a part of the anti-trust lawsuit that has since been removed. Only Bryson DeChambeau, Matt Jones, and Peter Uihlein remain as plaintiffs in the case. 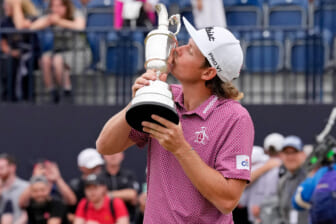 LIV’s next event is set to take place in October at the Stonehill Golf Club in Thailand.