NFL training camps. They’re actually here. Rookies are reporting, veterans are on their way next and soon practice fields will be buzzing with the sounds of whistles, coaches yelling and players screaming as they fight for every last inch of turf. Only, not all the top players in the league will be participating, as some NFL free agents are still looking for work.

And some of these guys who are still out of work are really darn good. For various reasons, they’ve remained unemployed, but that won’t be the case much longer.

As attrition wears down rosters in the heat of the summer, teams will be making some moves to acquire the likes of Anquan Boldin, Nick Mangold and Darrelle Revis. Oh, and there is a quarterback everyone loves to talk about who we will finally be able to talk about in football terms soon enough.

So where will these top free agents land? We’ve got some ideas about that.

It’s quite obvious that Kaepernick is a polarizing figure who has generated strong opinions, many of them negative.

But one thing we can’t argue much about is the fact that Kaepernick can still play the game at a serviceable level. Even without much in the way of receivers in San Francisco last year, he posted a 90.7 passer rating while throwing 16 touchdowns and just four interceptions.

Jacksonville’s two current top options — Blake Bortles and Chad Henne — have combined to throw 114 career interceptions in 111 career games. Bortles has already been put on notice by head coach Doug Marrone, who told him he’ll be benched if the turnovers persist.

But as we noted, Henne is no peach, either. If Bortles can’t beat out Kaepernick, then he doesn’t deserve to start.

Quite honestly, the Jaguars deserve a quarterback who can win games, and big ones, at that. They’ve invested heavily in free agency and have a roster stacked with talent on both sides of the ball.

Kaepernick’s playoff and big-game experience, combined with the running game Jacksonville is going to establish with Leonard Fournette, make him a perfect fit for the Jags this year.

The Browns should be a very interesting team to watch defensively in 2017, provided the injury bug doesn’t ravage the roster. However, there are secondary concerns, even after having added rookie Jabrill Peppers, who really did land in the perfect spot playing for Gregg Williams.

Most notably, at this point it looks like New York Jets reject Calvin Pryor is penciled in as one of the starting safeties. That’s not a great look, especially given the fact the inside linebacker position is also one in flux, with Tank Carder looking like a potential starter.

Adding a veteran in Byrd would be a solid move that would upgrade the entire secondary. While Byrd wasn’t the superstar the New Orleans Saints thought they landed a few years back in free agency, he wasn’t necessarily bad. They just couldn’t justifiably pay him the nearly $8 million he was due to earn in 2017.

Cleveland would be able to sign Byrd to a reasonable contract and let him mentor the young Peppers for the next year or two.

This is kind of a gimme.

Boldin played with the Lions last year and led the team in touchdown receptions with eight. He also hauled in 67 total passes, and while his yards per catch weren’t great (8.7) he’s still one of the best pure possession receivers in the game today at the age of 36.

The veteran pass catcher knows Jim Bob Cooter’s system like the back of his hand and already has a rapport with quarterback Matthew Stafford. That’s the kind of pure gold you just don’t throw away.

Boldin and the Lions have shown mutual interest in a reunion this year, and at this point it feels more like a matter of when, not if it’s going to happen. 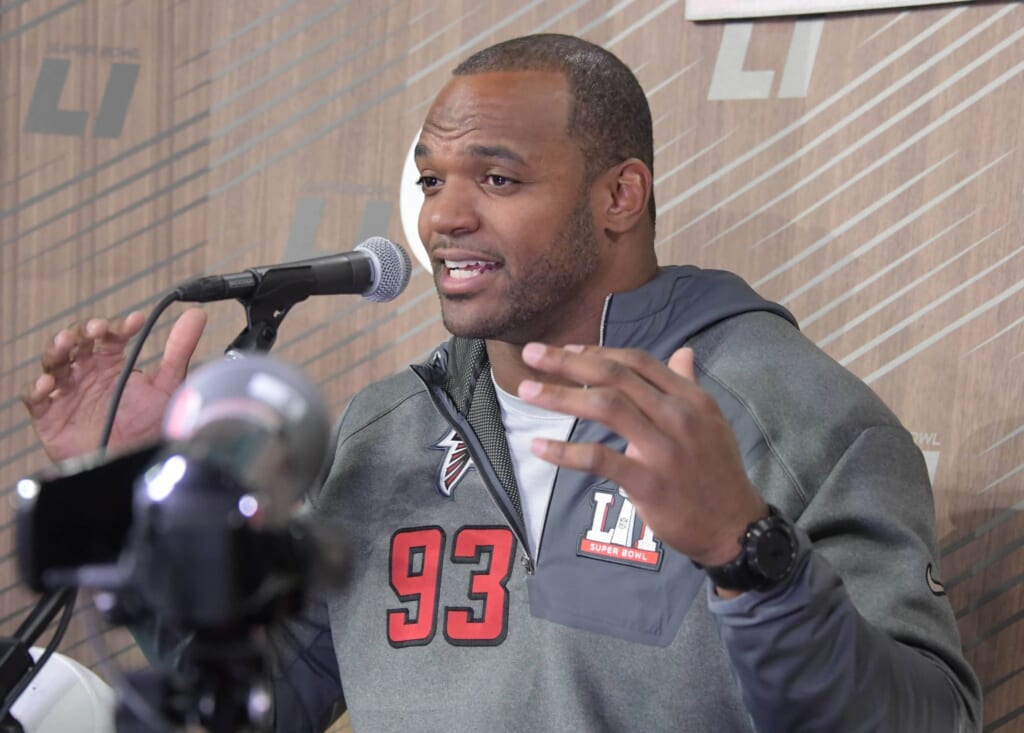 Was Freeney a huge piece to Atlanta’s NFC Championship team last year? The numbers would say no. After all, he managed just 13 total tackles and three sacks during the regular season, adding one tackle and one sack in the postseason.

The Falcons and Freeney have already been in touch about a potential deal to bring him back for another season.

“I’ve already been talking to the coaches and going back and forth here and there with the draft picks and free agents,” Freeney said, via Alex Marvez of Sporting News. “That line of communication is still very open. They say they’re still very interested. I’m planning to reach out to them here soon and hopefully we both believe they want me back and playing for them.”

This team is in need of all the emotional and mental toughness it can bring in for the 2017 season. We saw what happened to the Carolina Panthers after they lost Super Bowl 50. After watching Kyle Shanahan and most of his offensive coaching staff leave town this offseason, that could certainly happen to the Falcons this year as well.

With all that in mind, Atlanta should bring Freeney back into the fold.

The Browns have a couple of talented receivers in Corey Coleman and Kenny Britt. However, we’re not sold on either of them being reliably productive in 2016.

Britt just landed a big contract after finally putting together his first 1,000-yard season in eight years. Who knows if he’ll regress or if he’s going to continue playing at a high level?

As for Coleman, the kid can’t stay healthy. He missed six games due to injury last year and has already missed more time this offseason.

“I’m disappointed for him that he can’t continue to grow in the fundamentals and skills at his position,” receivers coach Al Saunders said at the end of minicamp, via Mary Kay Cabot of Cleveland.com. “He missed a significant amount of time last training camp [with a hamstring injury]. … He was having a terrific OTA session and then he got hurt.”

Jackson has missed time in each of his last two seasons, but he’s healthy now and has been waiting until the summer to look for his next team. This is a man who has big play abilities and who, until the past two years, had eclipsed 1,000 yards four years in a row. He would certainly be able to help the Browns this year, and they will need all the help they can get.

We all know Revis isn’t the same guy he used to be. He’s not going to lock down the likes of A.J. Green (we have proof of that) or Antonio Brown. Heck, at this point his best move might just be to move back to safety, rather than play on the corner.

Last year was humbling for the former All-Pro. He didn’t stay in great shape and gave laughable effort at times, but he says he’s amended his ways, dropped weight and is eager to put the past behind him.

One team that should look into adding Revis at a bargain rate is Green Bay. The Packers featured one of the NFL’s worst pass defenses last year and were soundly torched by the Falcons in the NFC Championship Game. And while they did some excellent work in the draft adding the likes of cornerback Kevin King and safety Josh Jones, they could do a lot worse than adding a veteran of Revis’ caliber.

Everyone wants to link Revis to the New England Patriots, but we don’t see that happening. It seems far more logical for him to play out his final years where the Cheeseheads roam.

It’s pretty crazy to think that Mangold is still unemployed. We’re talking about a seven-time Pro Bowler and two-time First-Team All Pro.

And before getting injured last year, Mangold was still playing at a very high level. He didn’t allow a single sack and allowed only five pressures in eight games.

The Jets cutting him had very little (if not nothing) to do with his abilities at this point in his career. It was just one of many moves the franchise made to pave way for a legitimate rebuilding project.

With all that out of the way, it’s safe to say this guy can still play.

The last we heard, the Ravens were still interested in potentially adding him as of May, though they never got past the tire-kicking stage of things. At this point, it seems safe to assume money is the biggest reason Mangold doesn’t have a job yet. According to Jeff Zrebiec of the Baltimore Sun, he was looking for top-10 money, which is right around $6 million per year.

That’s out of Baltimore’s price range. But the Ravens have a need, and perhaps now that time has passed Mangold is more amenable to doing a deal that works for both sides. 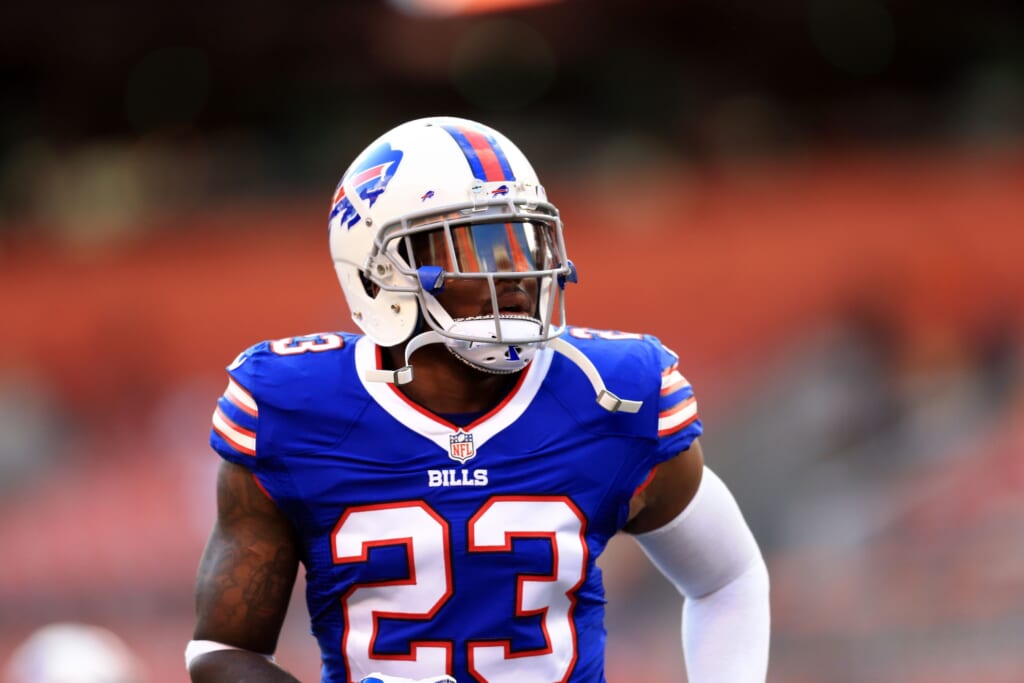 Houston lost some significant talent on the back end of its defense this offseason. Both cornerback A.J. Bouye and safety Quintin Demps left via free agency, representing two of the team’s best defensive secondary talents from last year’s squad.

At this time, it’s looking like some competition will play out at both safety spots, with Corey Moore battling Andre Hal at free safety and K.J. Dillon taking on Eddie Pleasant at strong safety. Hal and Moore have 30 starts between them, so that’s one spot that might be in good hands. Pleasant and Dillon, on the other hand, have one start between them. Period.

This is where Williams fits in.

Before missing time in each of his last two seasons due to injury, the 27-year-old safety had some very successful seasons with the Buffalo Bills. He’s been reported as healthy this spring and summer, and the Texans have had him in for a visit this year, which shows there is mutual interest.

We know teams cannot have enough talented defensive backs in today’s pass-happy NFL. Houston should add Williams to the fold this summer to help compete in the very competitive AFC South.