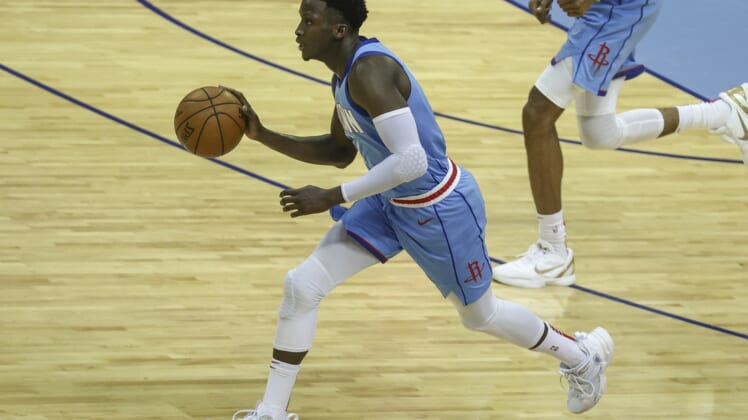 The Houston Rockets look stable after a rocky start to the season.

The New Orleans Pelicans are showing signs of improvement as they host the Rockets on Saturday.

Houston has won four consecutive games, matching the win total it produced over the previous 13 games.

The Rockets lost three of their first four games after they sent star guard James Harden to the Brooklyn Nets in a four-team trade on Jan. 13. Then came the winning streak, which includes a 104-101 home victory over Portland on Thursday. Houston overcame an early 20-point deficit to beat the Trail Blazers.

“The guys have grit and they’re determined,” Rockets coach Stephen Silas said. “The adversity part is something that we’ve been talking a lot about. I think earlier in the season adversity would hit and we would succumb to that adversity. But (against the Trail Blazers) we put forth the right energy to overcome it.”

Harden’s trade demand hovered over the Rockets throughout the early part of the season.

“It was kind of hard to play through that and find a chemistry,” Houston guard John Wall said. “And once we made the trade happen and we got the team that we wanted and the guys that wanted to be here and once we all committed to what we wanted to do, we were going to be a good team. Everybody has something to prove.”

Victor Oladipo, one of the key players acquired in the Harden trade, led the Rockets with 25 points against Portland.

The Pelicans lost eight of nine games before registering home victories against the Washington Wizards on Wednesday and the Milwaukee Bucks on Friday.

“We’re trying to get back on track,” said New Orleans guard Lonzo Ball, who has been the subject of trade rumors.

The Pelicans raced to a 29-point lead Friday and held off a furious Bucks comeback to prevail 131-126.

“I have to continue doing what I did tonight,” Ball said.

Zion Williamson scored 21 and had a career-high seven assists, Josh Hart scored 15 and Steven Adams collected 20 rebounds after grabbing 18 against the Wizards.

“It’s big for us to have the ball movement,” Williamson said. “Everybody was touching the ball, everybody’s getting the feel for it. It gives everybody confidence on the offensive end, which translates to the defensive end.”

The Pelicans made 21 of 48 3-point attempts, tying a franchise record for made 3-pointers and attempting a season high for the second consecutive game.

The Friday game is the middle contest in a five-game homestand for New Orleans and the opener on a four-game road trip for Houston.