Mahomes has been working his way back from offseason surgery to repair a turf toe injury in February. The 25-year-old had the procedure days after guiding the Chiefs to a second consecutive Super Bowl appearance, in which they fell to the Tampa Bay Buccaneers.

Mahomes, who previously said he was ahead of schedule in his rehabilitation, is expected to take part in a limited capacity when the Chiefs begin OTAs on Tuesday. He reportedly will take on a larger role during the team’s mandatory minicamp. 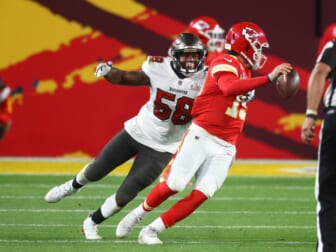 Mahomes played through the turf toe injury, which was sustained in the playoffs during Kansas City’s victory over the Cleveland Browns in the divisional round in January.

Mahomes was the league’s Most Valuable Player in 2018 before his consecutive Super Bowl seasons, including a win over the San Francisco 49ers in Super Bowl LIV.

Mahomes has a 38-8 career regular-season record as a starter in four NFL seasons, all with the Chiefs. Last year, he completed 66.3 percent of his passes for 4,740 yards with 38 touchdowns and six interceptions. For his career, he has a 66 percent completion rate with 14,152 passing yards, 114 TD passes and 24 interceptions.