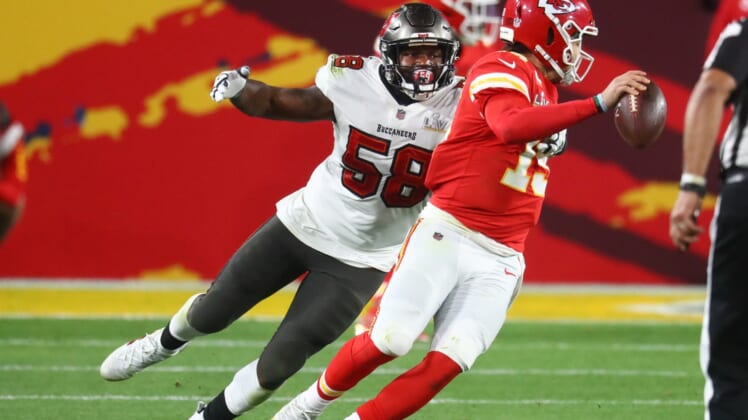 Kansas City Chiefs quarterback Patrick Mahomes said Monday he is ahead of schedule in his rehab after undergoing offseason surgery to repair a turf toe injury.

Mahomes had the procedure days after guiding the Chiefs to a second consecutive Super Bowl appearance, in which they fell to the Tampa Bay Buccaneers.

“Obviously, we’re trying to be cautious and not push me out there too soon, but I’m doing what I can,” Mahomes said. “I’ve gotten out of the boot finally. It took forever. Now I’m trying to get back on the field and get that stuff working.

“I’m sure they’ll keep me along that same pathway and that hopefully I can do some stuff by the end of the offseason.”

Mahomes played through the injury, sustained in the playoffs during Kansas City’s victory over the Cleveland Browns in the divisional round in January.

Mahomes, 25, was the league’s Most Valuable Player in 2018 before his consecutive Super Bowl seasons, including a win over the San Francisco 49ers in Super Bowl LIV. Even so, he believes he can get better as he gets healthier.

“There are so many different things I can improve in my game,” Mahomes said. “Being able to kind of restart and start from injury with the feet, I can really improve my footwork and try to make myself better.

“I’ve dealt with ankle injuries in my career and being able to teach myself how to hit the right spots in my feet, by teaching myself just how to get back from this injury I think will help me out in the long run and something that I can really focus on.”

Chiefs coach Andy Reid added, “He’s got great flexibility in that toe. He worked his tail off, not a real fun thing for him to do with that. It seems like a small thing, but that toe is rather large and stiff before the surgery and after the surgery. He’s really worked hard to get that right.”

Mahomes has a 38-8 career regular-season record as a starter in four NFL seasons, all with the Chiefs. Last year, he completed 66.3 percent of his passes for 4,740 yards with 38 touchdowns and six interceptions. For his career, he has a 66 percent completion rate with 14,152 passing yards, 114 TD passes and 24 interceptions.