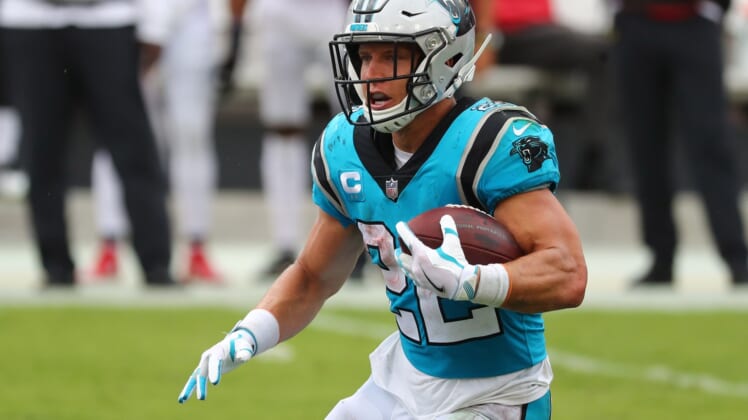 There was some thought given to the idea that Carolina Panthers running back Christian McCaffrey would return from his high-ankle sprain Thursday night against the Atlanta Falcons. That’s not going to be the case. The injury will keep him out for more time, as the Panthers noted in their most-recent report.

Panthers injury report: Christian McCaffrey will not return until he’s 100%

“He could probably come back early, but he would not be the same player he always is,” Rhule told Will Kunkel of FOX 46. “So we are making sure he is 100 percent – not 99 percent, 100 percent — and if you know Christian, he’s fighting, scratching, clawing to play. We don’t want to put him out there too early, but when he comes out there, whenever it is, I know he’s going to be something special to watch.”

The NFL’s single-best dual threat running back, McCaffrey has only suited up in two games this season. He’s been out since Sept. 20 and remains on the injured reserve list.

All said, the former Stanford standout headed into the 2020 NFL season having put up north of 5,400 total yards and 39 touchdowns in just three years.

It led to the Panthers signing him to a record-breaking contract extension during the offseason. The contract called for $64.06 million over four seasons with $30.06 million guaranteed at signing.

Some questioned why McCaffrey received such a huge contract. However, his importance to the Panthers’ success bleeds over to the passing game. The back has tallied 310 catches in 50 career games.

The Panthers sit at a surprising 3-3 under first-year head coach Matt Rhule. With that said, they have struggled putting points on the board. The Panthers averaged 23.1 points per game, the eighth-lowest total in the NFL.

After taking on the Falcons in Week 8, these Panthers will go up against the Chiefs and Buccaneers in consecutive weeks. Needless to say, the hope is that McCaffrey will be back for those two games.