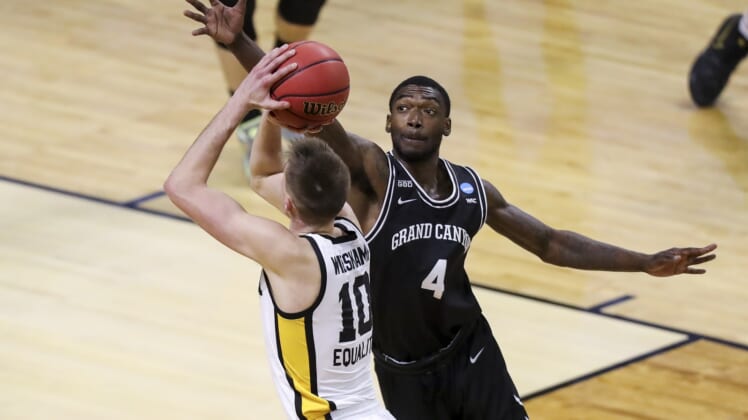 Oscar Frayer, a senior forward for the Grand Canyon University men’s basketball team, died in a vehicle accident just days after his team played in the NCAA Tournament.

The GCU Antelopes earned a spot in the men’s tournament after winning the Western Athletic Conference. It was the first trip to the NCAA Tournament in the program’s history, after making the jump from the Division II level in 2017.

Taking place in Indianapolis, the Antelopes earned the No. 15 seed in the West region and drew a matchup against the No.2-seeded Iowa Hawkeyes. Iowa won 86-74, avoiding an upset thanks to a strong first-half performance from Luka Garza.

Frayer, a starting forward, played 25 minutes and made strong contributions. He finished with eight points, five assists, three rebounds, and three blocks, while shooting 42.8% from the field. Frayer finished his senior season averaging 6.6 points, 2.5 rebounds and 2.0 assists per game.

Grand Canyon University confirmed Thursday evening that Frayer, his older sister Andrea Moore and a friend were killed in a car accident. Tragically, per the school’s website, Frayer lost his father in a car accident at the age of 7.

Officials from the California Highway Patrol, per TMZ, indicated that the accident occurred around 2:30 AM on Tuesday in Lodi, Calif. The SUV lost control and veered off the road, slamming into a CHP vehicle. After colliding with the patrol car, the SUV eventually struck a tree and then became engulfed in flames.

Frayer joined the Antelope in 2016, becoming one of the program’s most recognized and seeing its rise from a DII contender to the high point of reaching the NCAA Tournament this season. He played in 121 career games, making 107 starts for the Antelopes.

Our thoughts and condolences go out to the GCU family and all of those impacted by this tragic accident.